Treating Crohn’s and Colitis Is Not An Exact Science

There is no magic pill to treat IBD. There is no 1-size-fits-all diet or cure-all method.

Despite developing research and treatments, many living with Crohn's and ulcerative colitis (UC) are constantly looking for new ways to ease symptoms. Without 1 clear treatment path, it often takes trial and error that some find relief. The path to potential remission can be winding – and just as unique as the person with Crohn's or UC.

To learn more about how people with Crohn's and UC treat their condition, we conducted our 5th Inflammatory Bowel Disease In America Survey. More than 1,300 people with IBD completed the survey and shared their experiences.

Common treatments for Crohn’s and UC

Survey results show that commonly used medicines for Crohn's, UC, and other types of IBD include:

When it comes to flares, 91 percent said they have treated an IBD flare. Oral corticosteroids (steroids) and NSAIDs (pain medicines) were the most common types of treatment for flares. 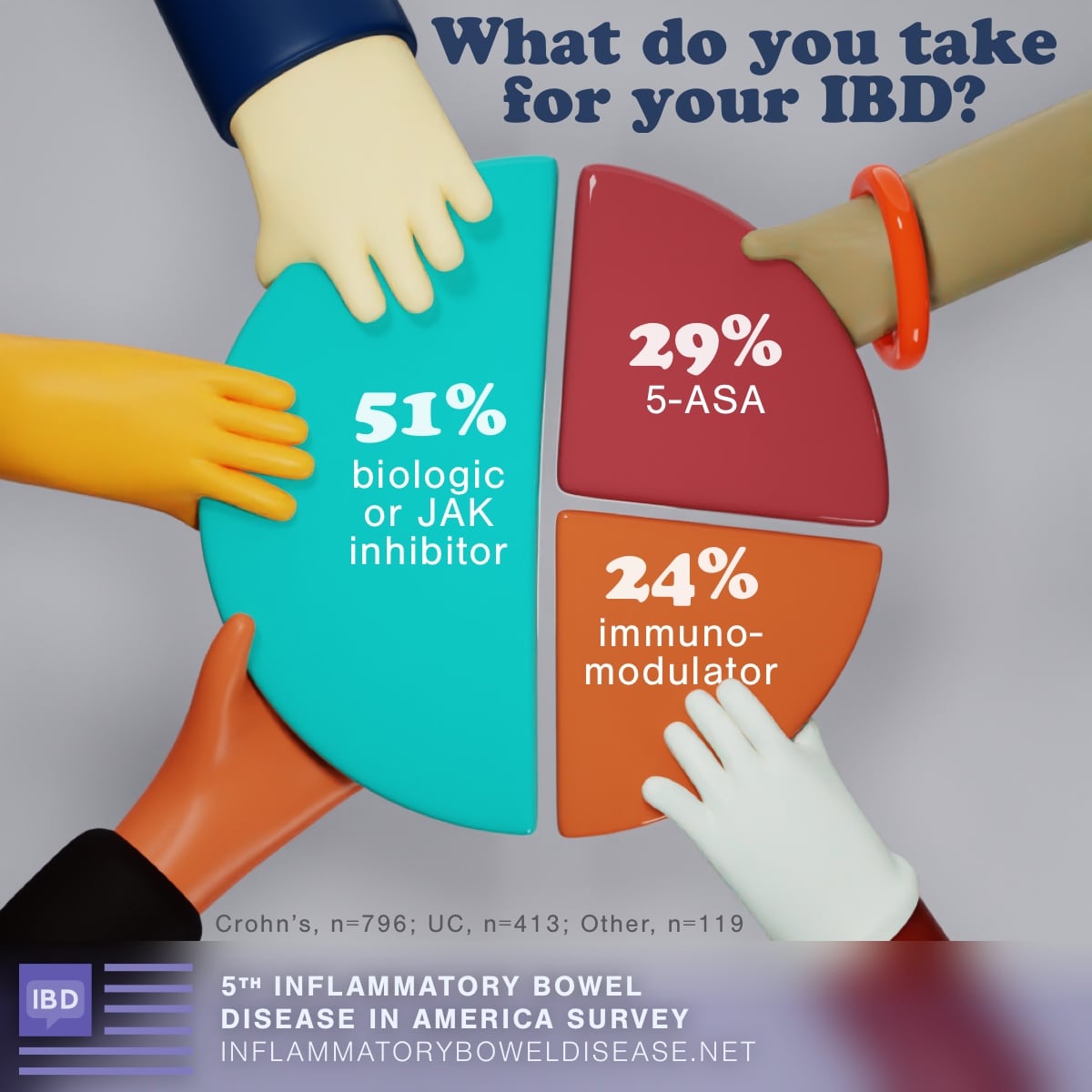 Nearly half of respondents said they limit or avoid certain foods as part of their treatment. The range of dietary needs varies greatly from person to person. As 1 person said, “Five people may have the same diagnosis but need different, individualized diet and treatment plans."

So what changes have they made? Eating strategies include avoiding restaurants, modifying portion sizes, and changing the time of day they eat.

And what about diets? People surveyed mentioned a variety of specific diets, including dairy-free, gluten-free, paleo, and vegan, among many others. Other common diet options included:

So what is the best dietary treatment for Crohn's and UC? The answer is as individual as each person. 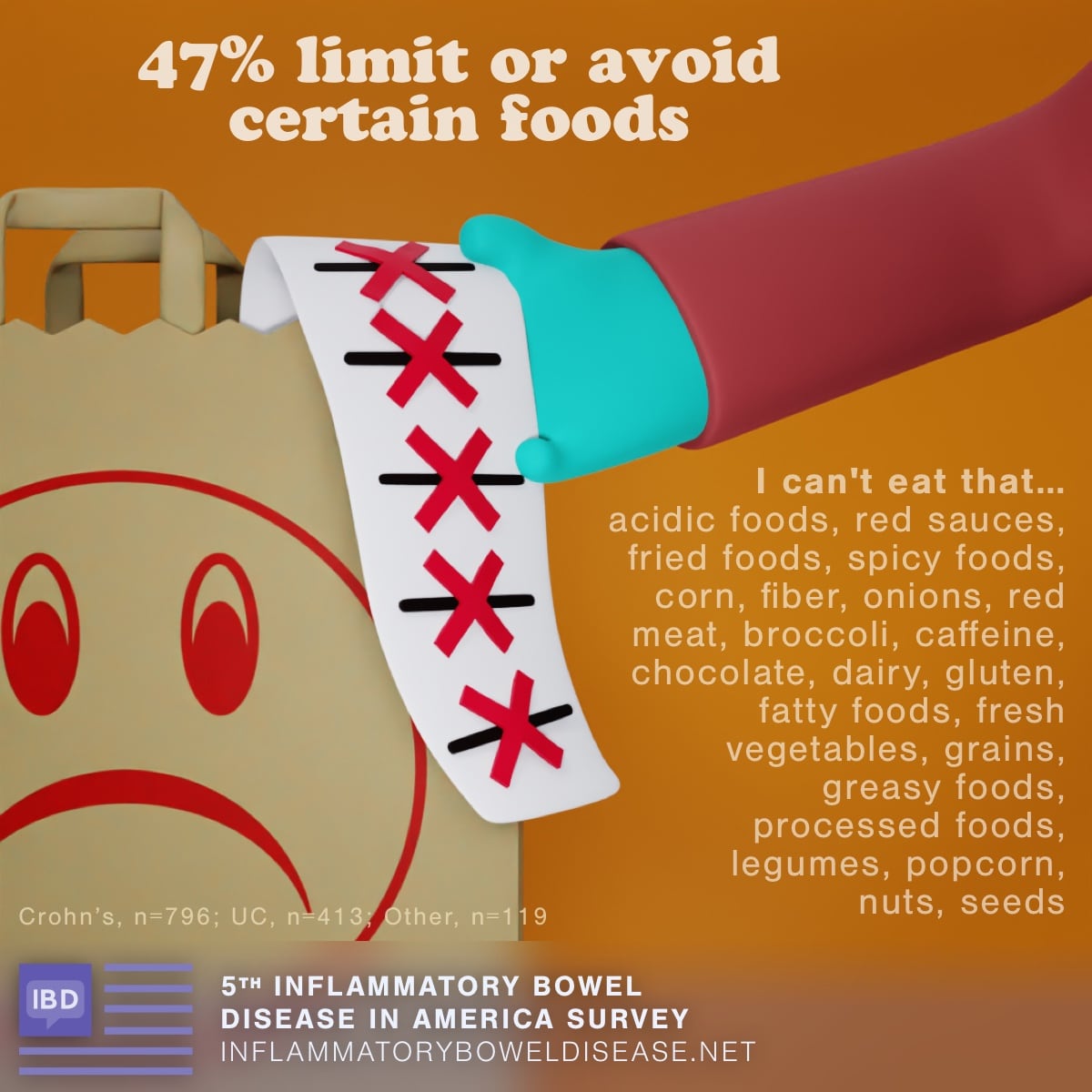 Beyond medicine and dietary changes, some people with IBD need surgery. Of those who took the survey, 45 percent have had a surgical procedure to treat their IBD or its complications A bowel resection was the most common surgery for both Crohn's and UC. 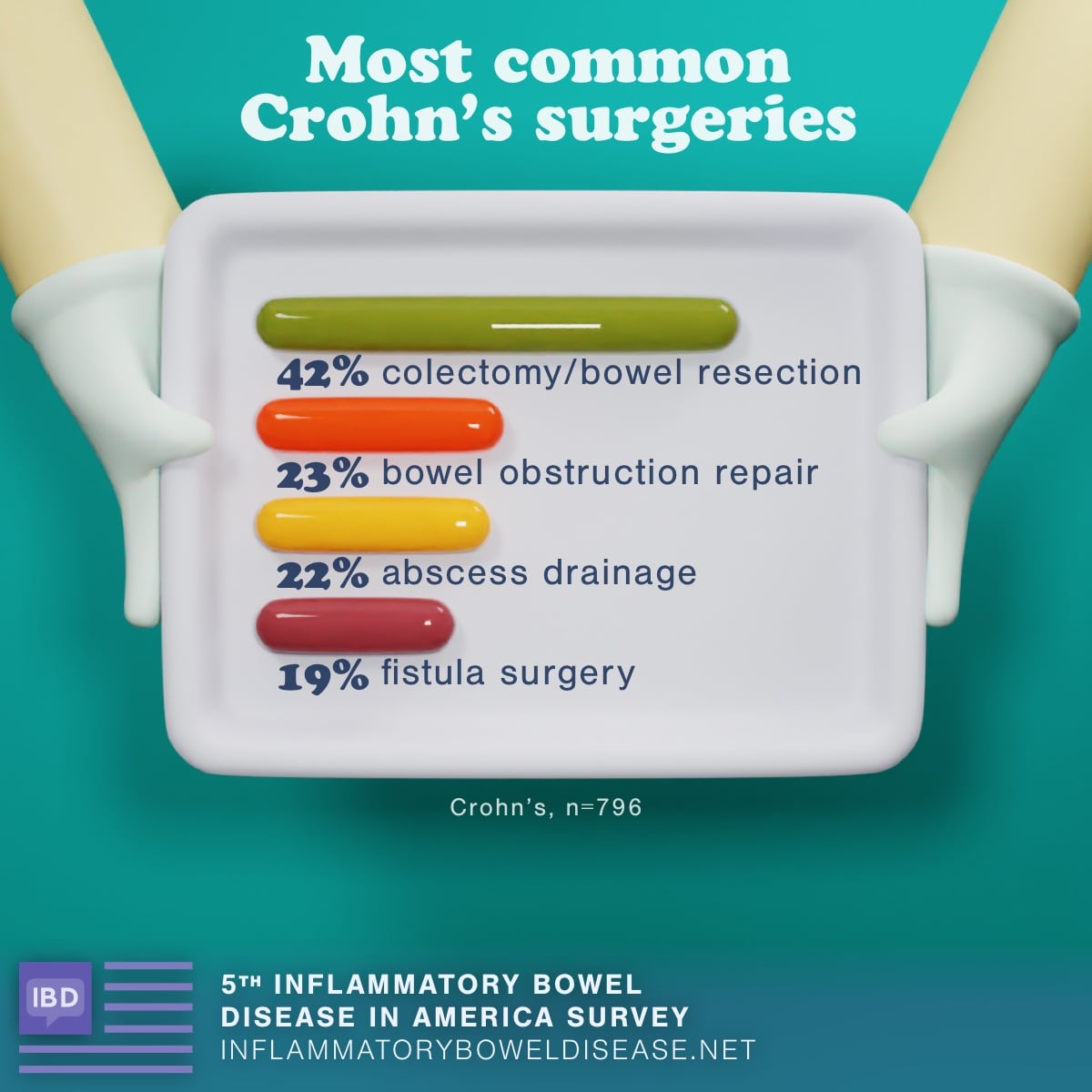 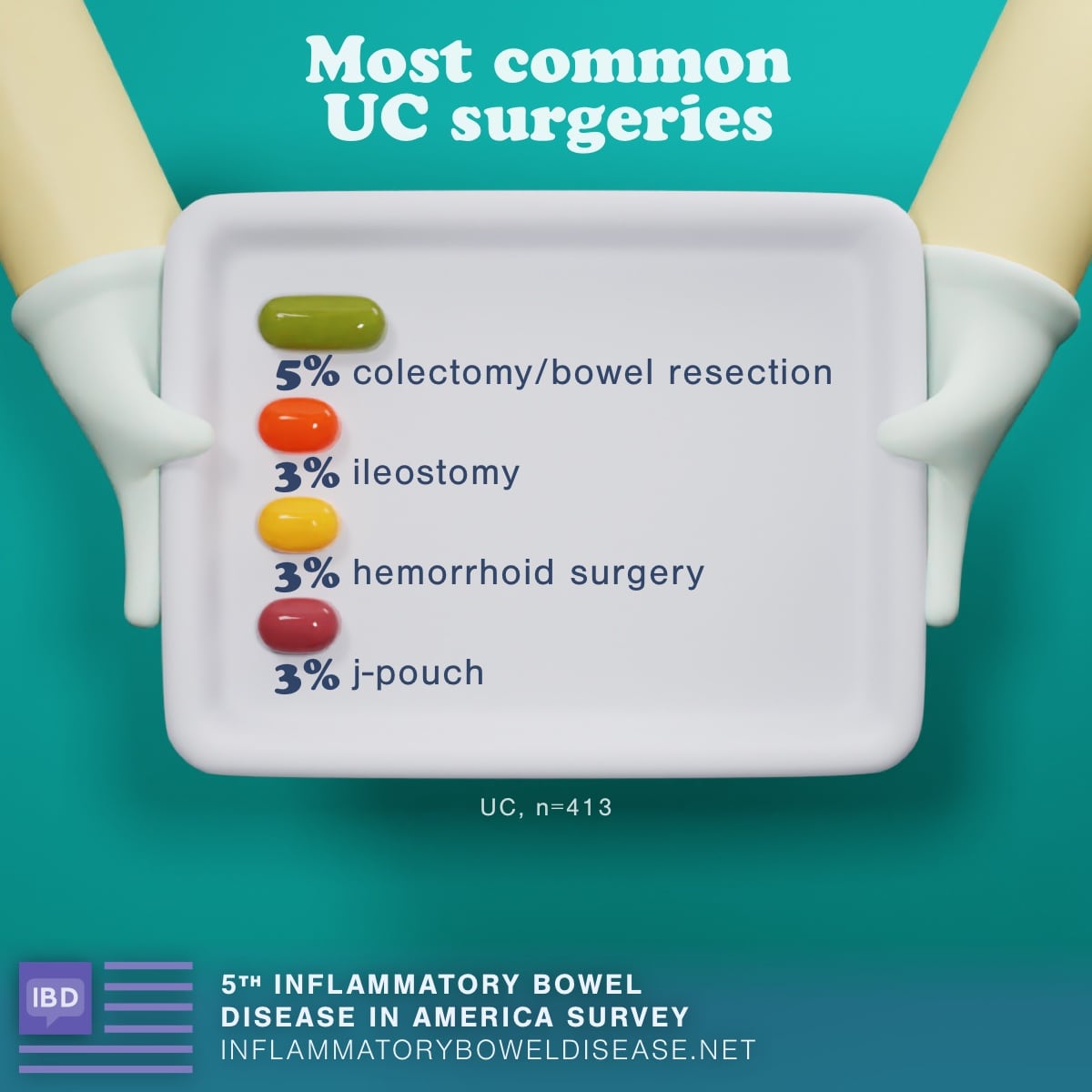 In addition to all of these treatments, those surveyed reported a wide range of lifestyle changes and alternative therapies they use to ease symptoms.

Limiting stress is key for many, with 30 percent saying they practice mindfulness. A majority say they increase their hydration to manage their IBD (63 percent), while 29 percent said they avoid stimulants like caffeine and tobacco. Certain vitamins and supplements are also popular. 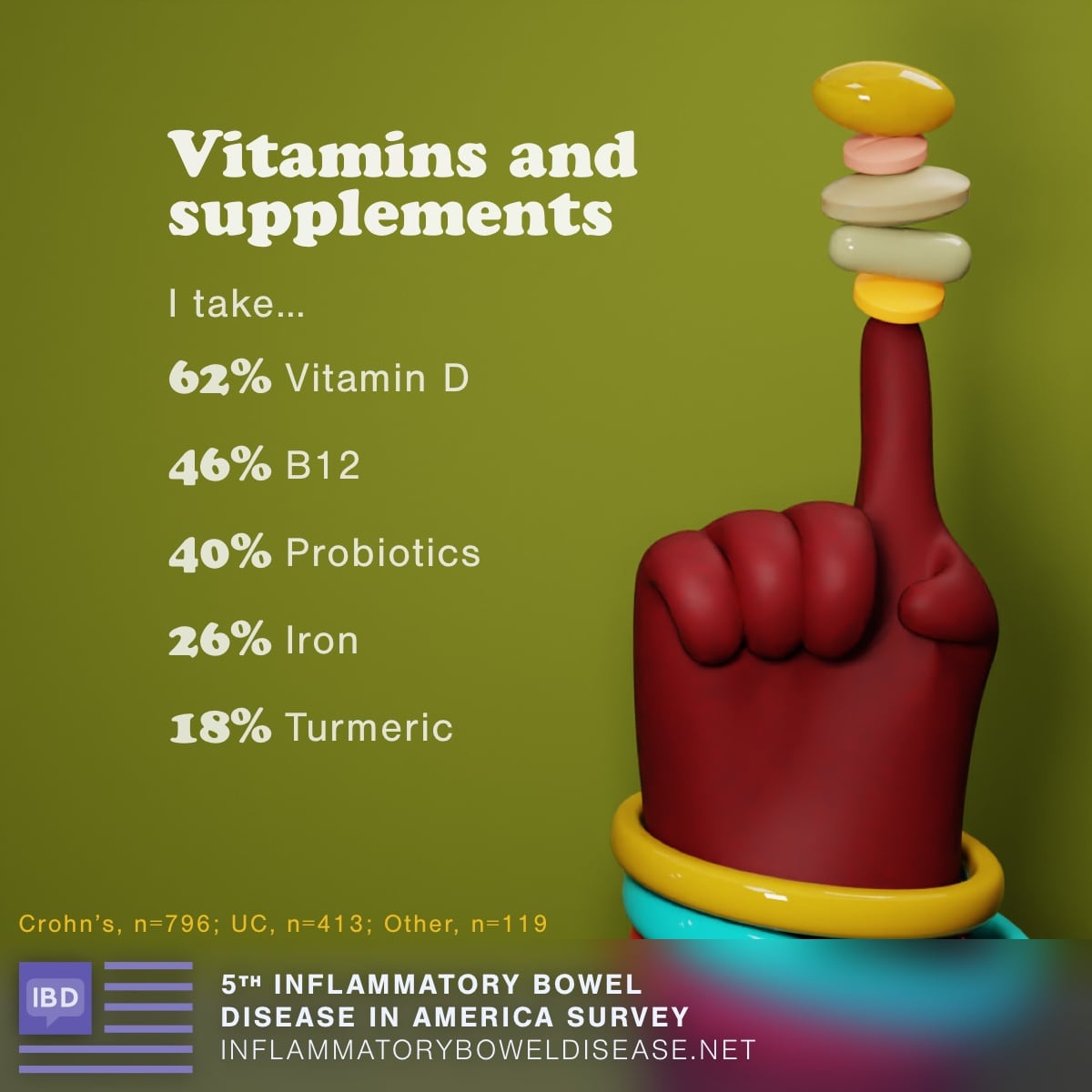 So, reaching remission… Is it possible?

Nearly 1 out of 4 respondents* cite their IBD symptoms to be under control on their current treatment plan.  People with UC felt they had greater control (29 percent) than their Crohn's counterparts (23 percent).

However, nearly 50 percent experience IBD symptoms more than 15 days a month. So while treatment paths may look quite different from person to person, the frequent nature of their symptoms are 1 thing they have in common. 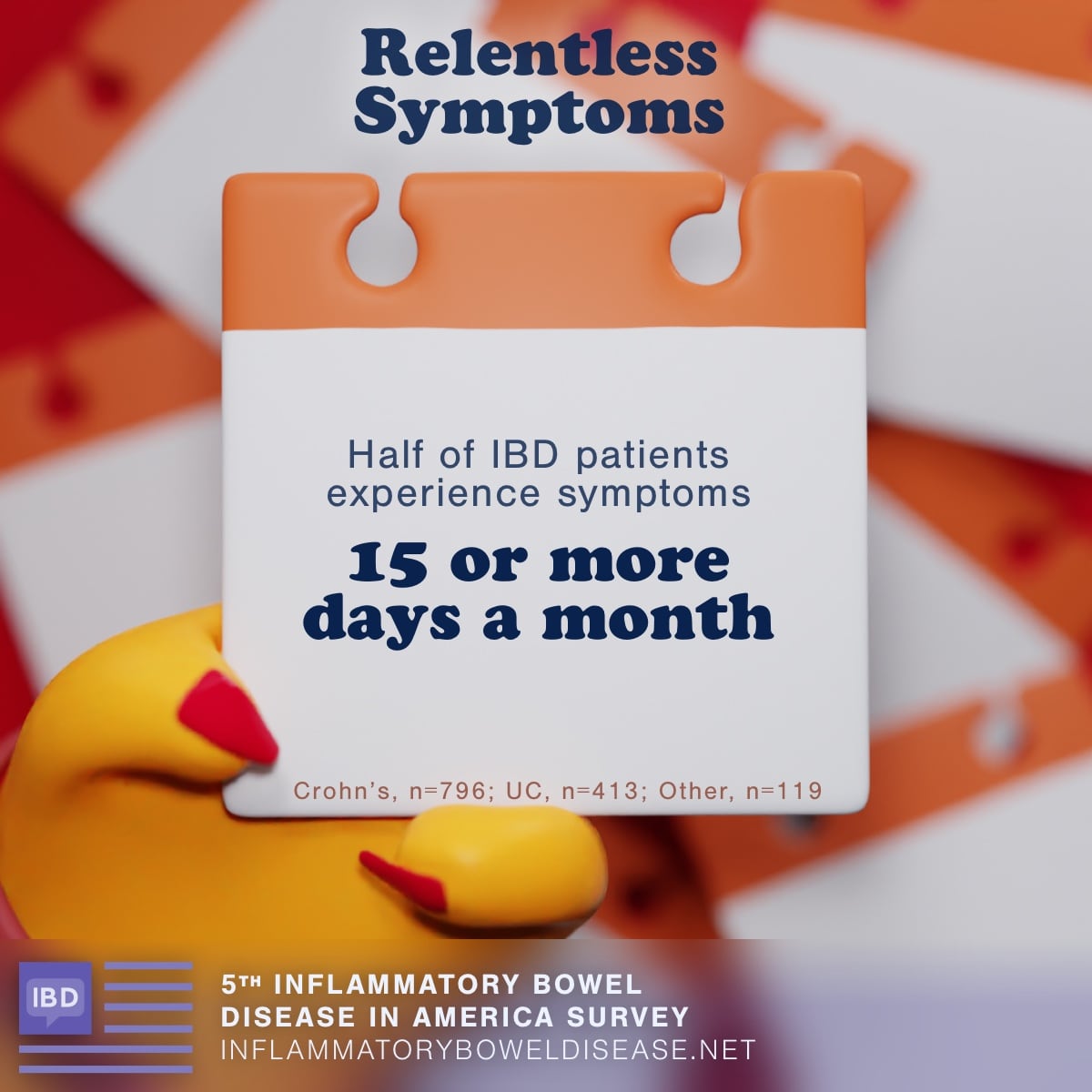