Crohn’s Disease Symptoms By The Numbers

For those with Crohn’s disease, the variety and severity of symptoms experienced can seem overwhelming and confusing. But you are not alone. Here are a few numbers we uncovered from the Crohn’s Disease In America 2016 online survey. The survey gathered insights from 2,018 respondents across the US about their symptoms, treatments, and quality of life living with Crohn’s. 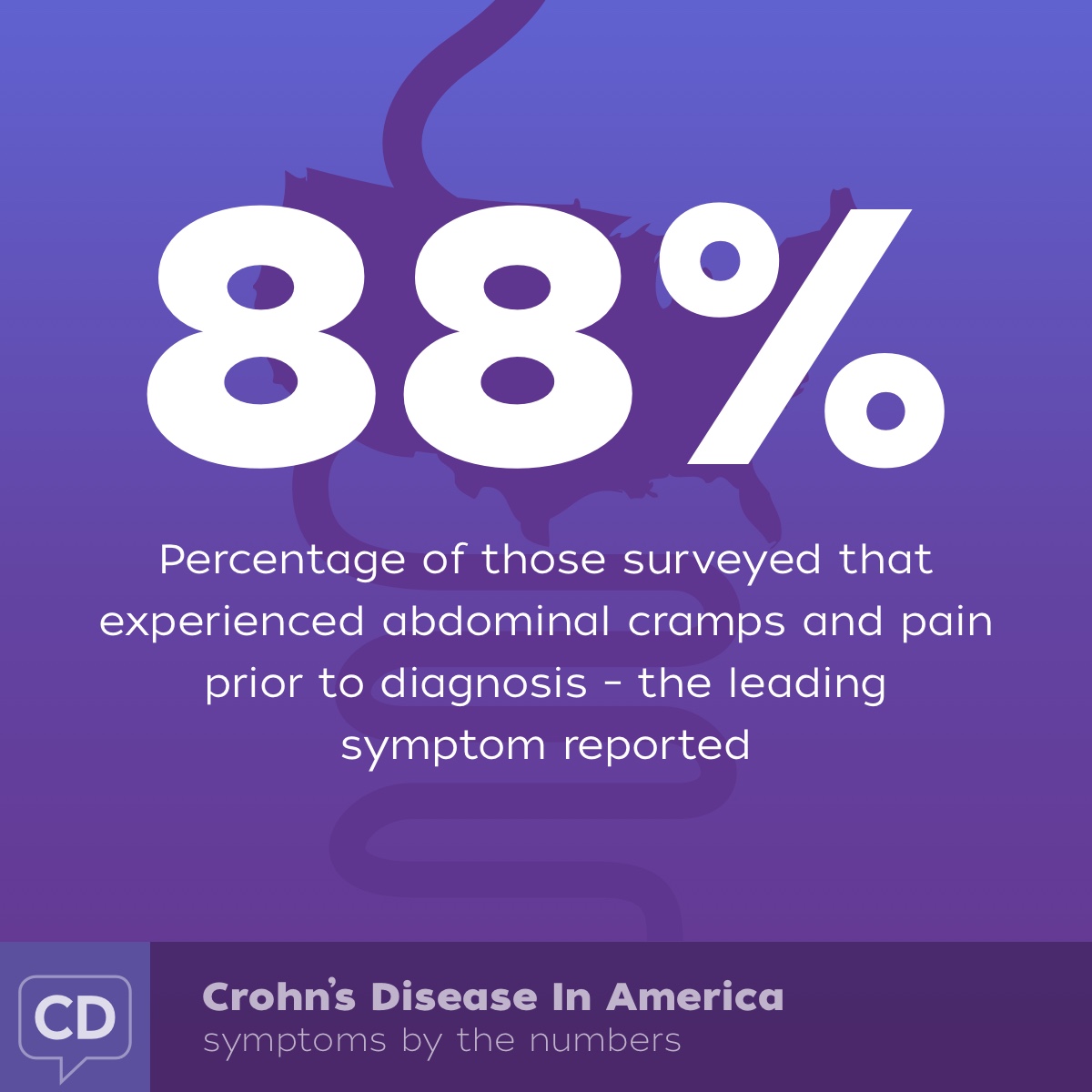 88%
Of those surveyed experienced abdominal cramps and pain prior to diagnosis – the leading symptom reported. Other commonly reported symptoms were chronic/persistent diarrhea (72%) and fatigue/low energy (65%). Whereas symptoms such as night sweats (23%) and constipation (21%) were not typically recounted. 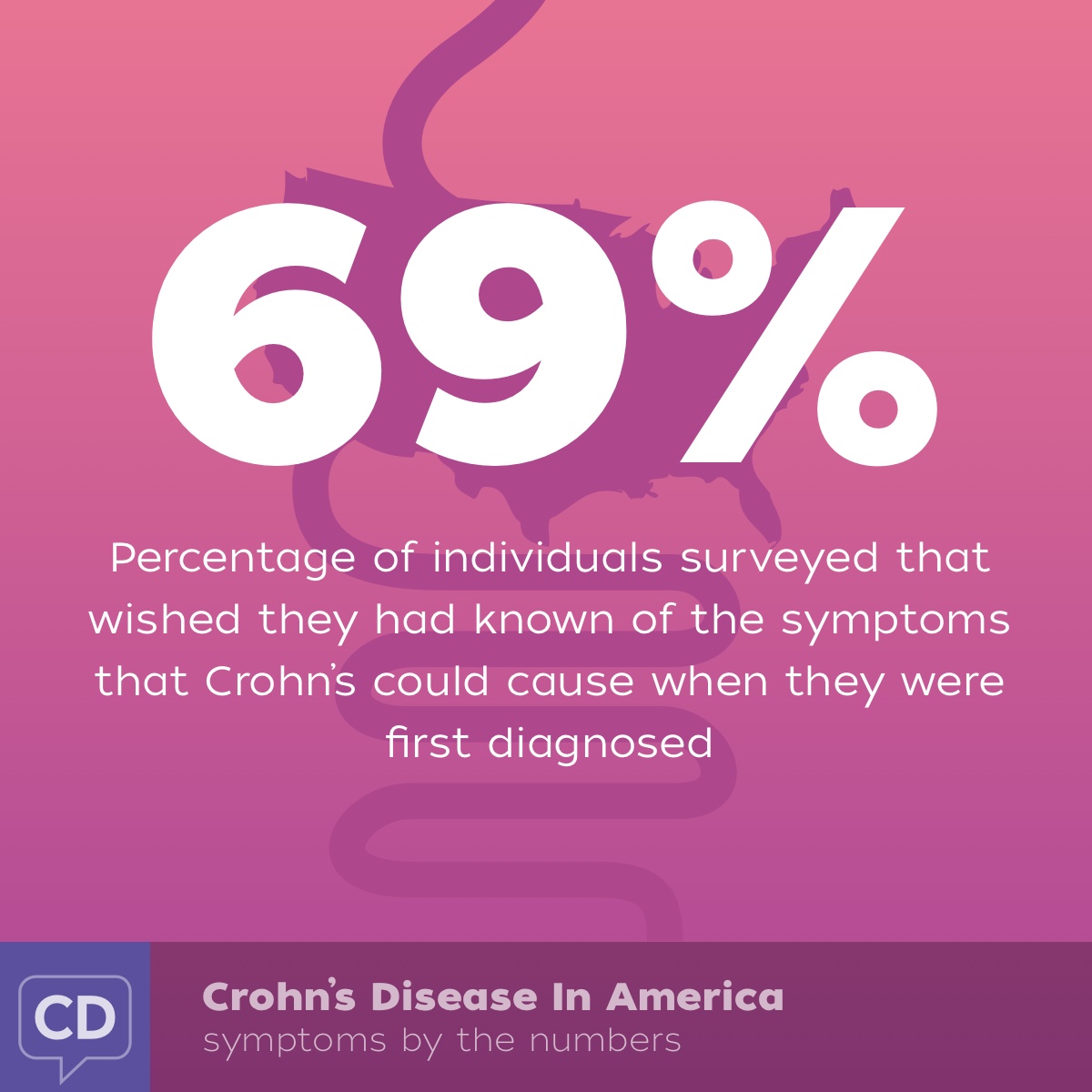 69%
Wished they knew all of the symptoms that Crohn’s could cause when they were first diagnosed. Similarly, 71% wished they knew how the condition would affect their lifestyle. 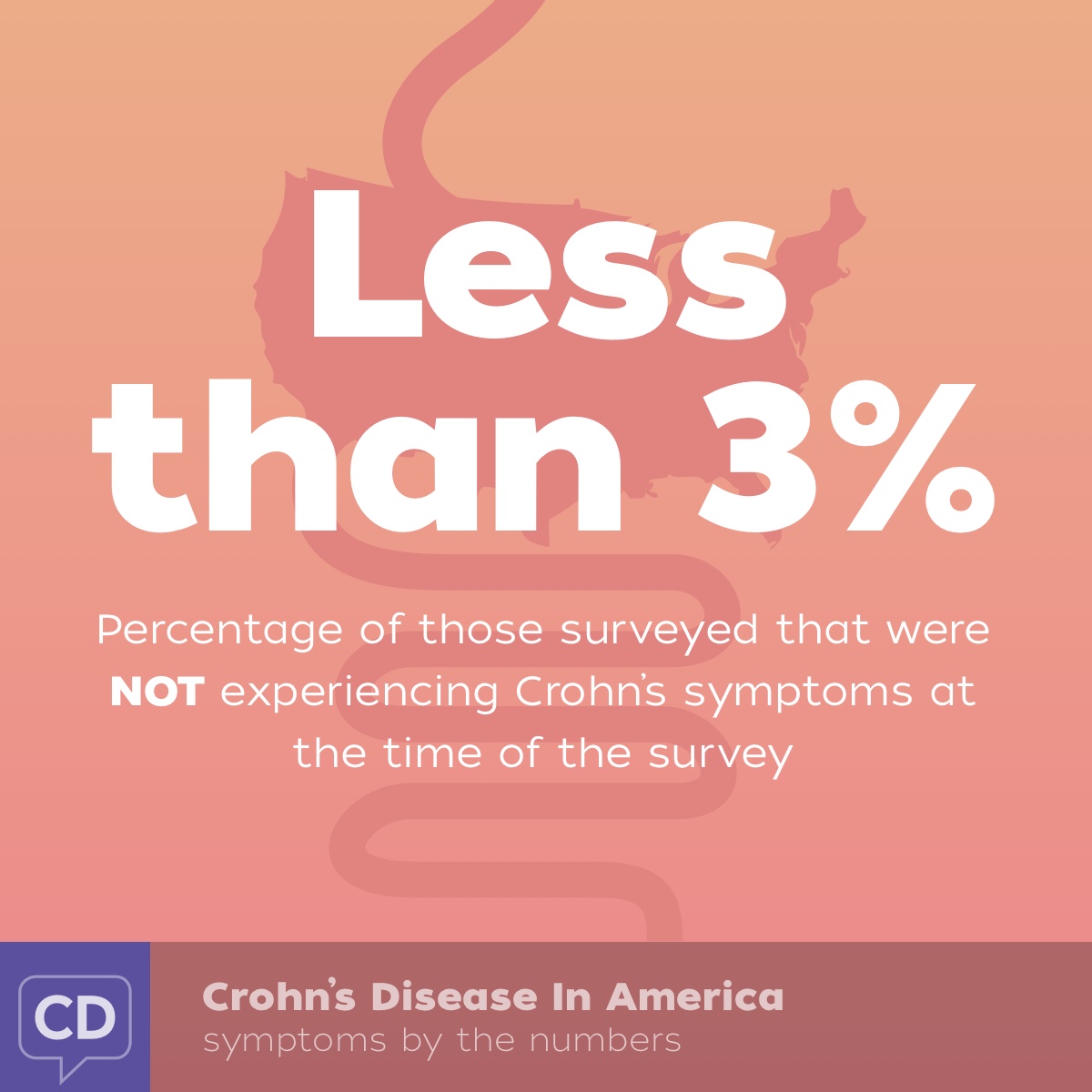 Less than 3%
Of those surveyed were NOT experiencing Crohn’s symptoms at the time of the survey. Bloating was the most prevalent symptom (86%), as well as abdominal cramps and pain (80%), inflammation of the liver or bile ducts (72%), and the urgent need to move one’s bowels (69%). Lesser common symptoms were perianal disease (12%), low-grade fever (10%), and fullness in the abdomen (7%).

57%
Cited fatigue/low energy as a present symptom. Of those suffering from fatigue, 68% cited it as the most difficult of their Crohn’s symptoms to manage – the utmost difficult to manage among all symptoms experienced. Of its sufferers, 66% experienced it daily, 23% a few days a week, and only 10% experience once a week or less frequently. 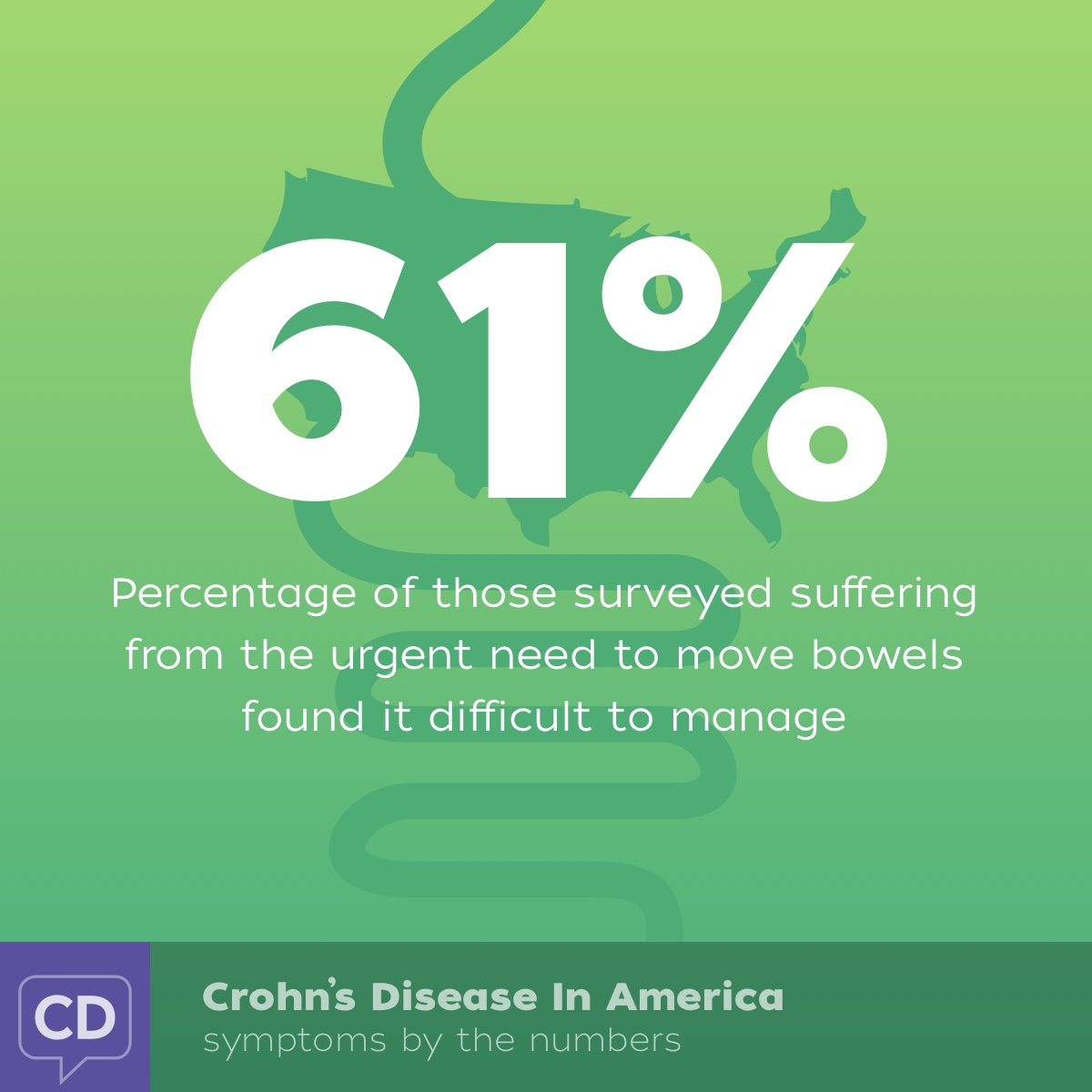 About 1/4
Of individuals had never gone into remission. Of the 76% that have gone into remission, medication was the primary reason (8 out of 10). Remission typically lasted less than 3 years (75%) and only more than 10 years for 5%. 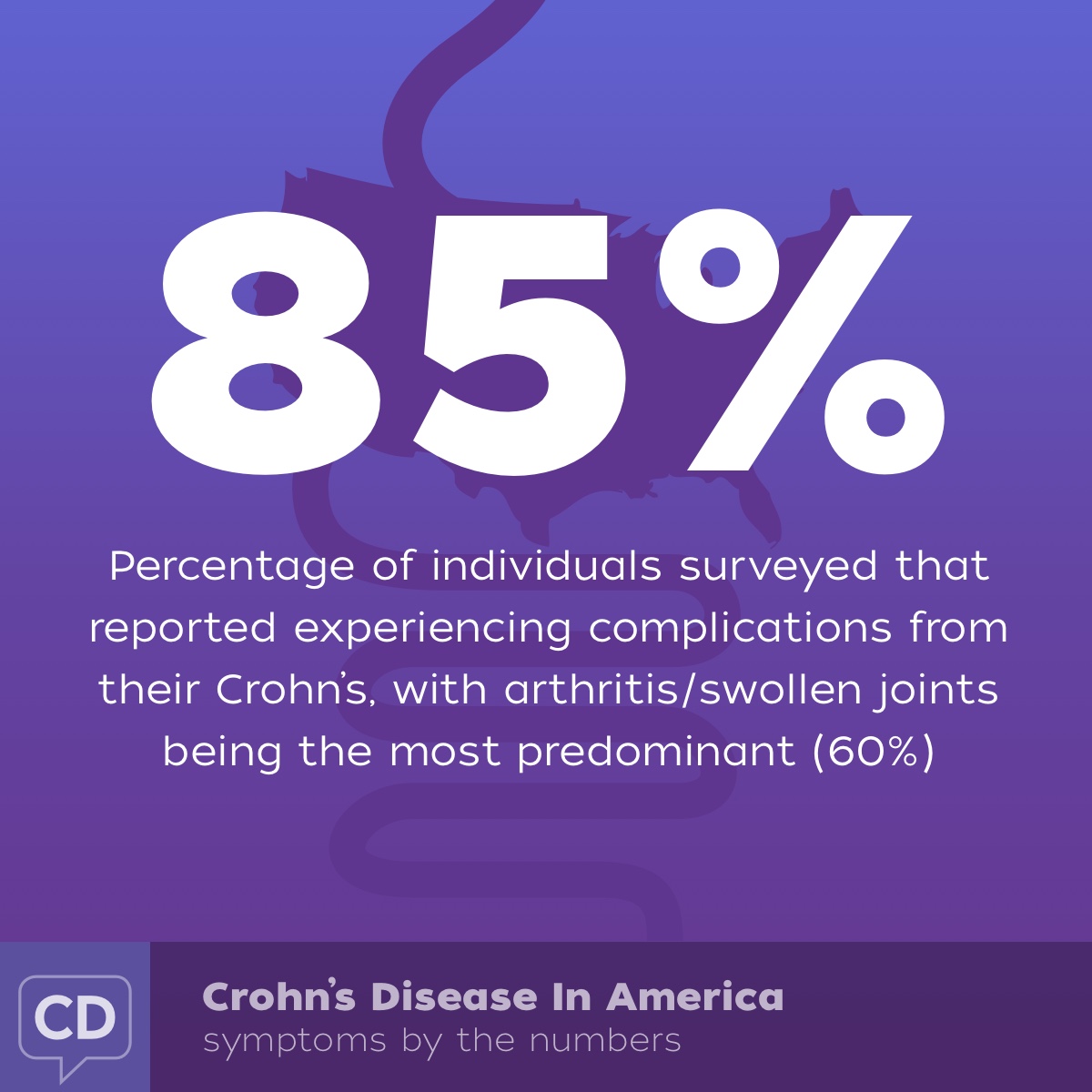 85%
Of individuals reported experiencing complications from their Crohn’s, with arthritis/swollen joints being the most predominant (60%). Other complications frequently experienced include malnutrition/nutritional deficiencies (37%), anemia (36%), and skin rashes (30%). Colon cancer and toxic megacolon/toxic colitis were reported by less than 1% of individuals.

30%
Of individuals not taking a prescription medication for their Crohn’s attributed this to their symptoms not being bad enough to warrant it.

These results encompass only a fraction of the numerous symptoms one can experience with Crohn’s disease, which is just one reason why 42% of those surveyed sought more information about symptoms. Education is key with this complex disease!