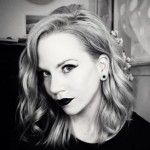 It’s a sentence that has been said to me a lot during my lifetime with Crohn’s disease. I understand why healthy people say those words, but I can’t stand when they are said to me in a way that makes it sound like they are envious of my life. My life is nothing to envy and it takes me a great deal of practice not to envy the lives of those who say things like this to me. They seem to take something for granted that I long for – health.

When healthy people think about not going to school or to work they probably vision a day of rest or perhaps fun and devoid of all their responsibilities. I totally get it! There was a short time in my life during high school where I was able to work consistently and I too longed for those kinds of days off from work and school. I wanted a break from the responsibility, but my life as a sick person is not something that people should say “I wish I was sick so I could stay at home too” in their snarky tones. As if I enjoy any bit of it!

The last time I was forced out of work was when I had my third emergency surgery. I ended up being in the hospital for 3 months and had many complications. It was remarked to me by a few of my co-workers that they were jealous of me because I didn’t have to work. Why?, I wondered.

My daily life was not fun and games. It went a little something like this: 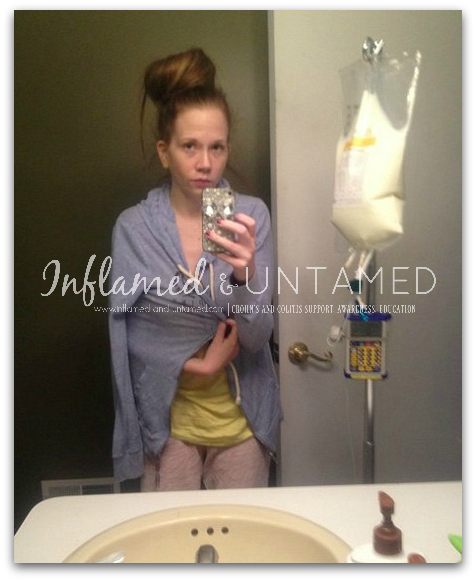 Morning: I would wake up after getting about 3 hours of sleep having to pee so bad because during the night I had a huge bag of nutrition pumped into my bloodstream via a PICC line. This was my only source of nutrition at the time because I was unable to eat.

Then I would spend the next 10 minutes unhooking my nutrition, flushing my line by myself with saline and heparin, making sure my PICC line was clean and didn’t look infected, and would put away and/or organize medical supplies. I would also take out a new bag of IV nutrition that I would use that night because it would need to spend the day getting to room temperature.

Next I would probably decide not to shower because at 100 pounds and 5’5″ and very weak from 3 months in the hospital, I felt too weak. Plus I was freezing cold all of the time. If I did shower (which I did once a week) it would be a huge process of putting a space heater in the bathroom because of how freezing cold I felt and then making sure my PICC line was wrapped up and would completely seal out water because if it got wet it would be a life and death emergency. Showering with my PICC line in was exhausting. 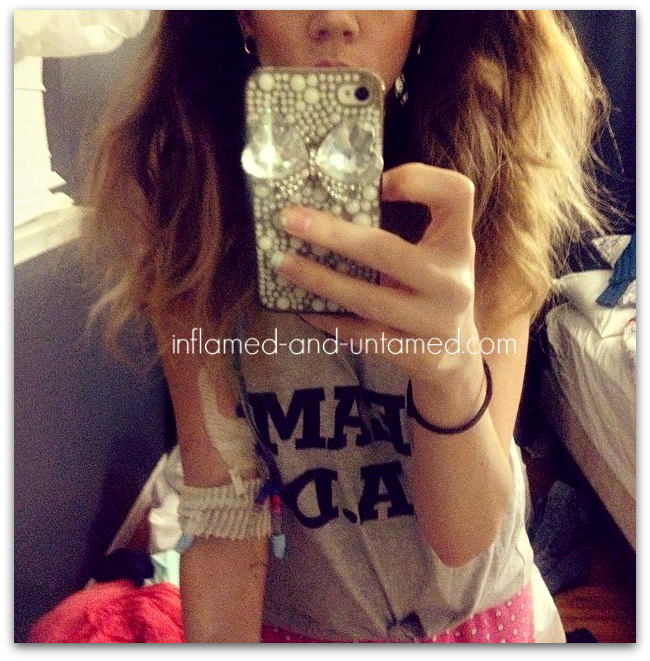 Day time: I would spend the rest of my time laying down on the couch watching TV. To some this might seem excellent but it’s not excellent when you do this day after day after day. Of course I was alone all day because everyone I knew had work or school and their lives to live. My friends started to call less and less frequently and our relationships grew distant. I was also not making money which meant I could not do anything and was relying on others to help me.  That’s one thing people often forget about those of us who are out of work, that we don’t have an income and that can be really scary and alter a lot about your life.

That was the majority of my day – laying on the couch. Most days I didn’t even know what day it was anymore because they all just seemed to run together. My home nurse would come visit me in the afternoon and she would draw blood from my PICC line, take my weight and my vitals and change my PICC line dressing if it needed that. That would be my only human contact until my housemate got home later. Sometimes I would get a call from HomeMed about the next weeks delivery of TPN.

Evening: My housemate would get home from work and we would watch TV and I would rely on her to help me run errands or pick up prescriptions if I needed to. Then came the process of hooking up that nights “food.” I would have to make sure I was in the clothes I wanted to sleep in because once I had my TPN running I would have to go through the process of stopping the pump and unhooking from my PICC line if I wanted to change. Setting up my TPN meant cleansing my hands, wearing sterile gloves, making sure the area was sterile, injecting vitamins into the bag, priming the line, setting the pump, flushing my line, and then starting my 12 hour infusion. I did this for 9 months. 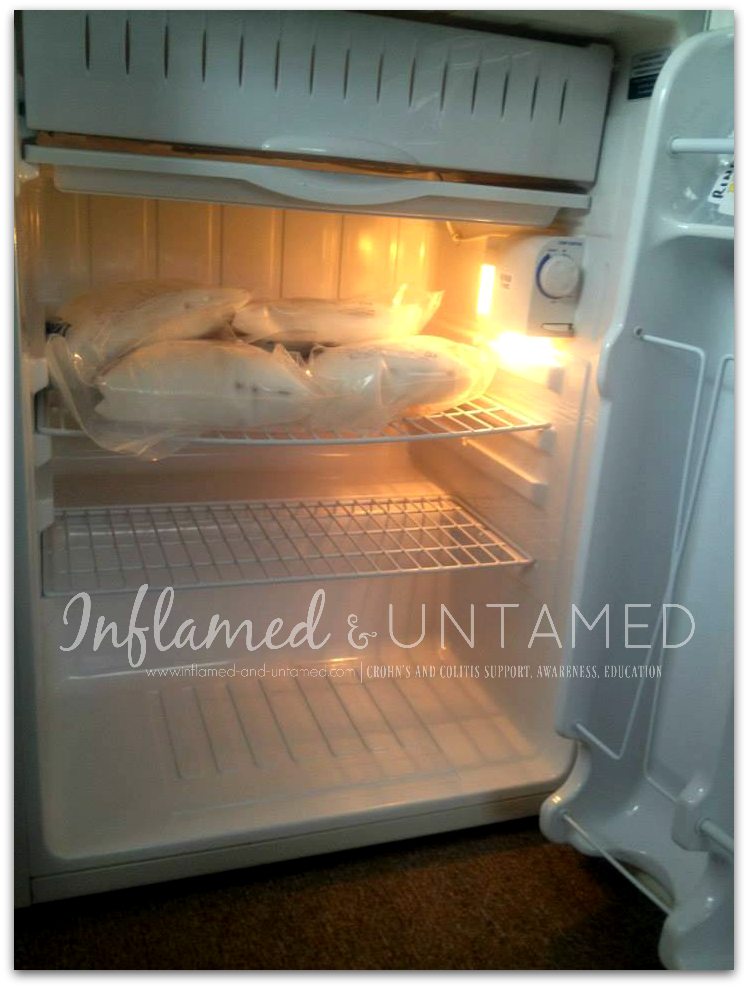 Night: I would go to bed with my IV pole next to me. Since I was underweight I was freezing all of the time and could not get warm. I slept with a heated mattress pad and tons of blankets but even that did not help and I would be shivering, chilled to the bone. Getting to sleep was a challenge because of that and because I was so boney that any position I laid in was uncomfortable. I also had to get up to pee what seemed like every half an hour because of the TPN.

My life was nothing to envy. I was not able to eat food at all. I lived with a central line in that I had to be super careful about because an infection could mean losing my life. I was in pain, nauseous, and weak. My iron levels were so low that anemia was seriously affecting my quality of life. I missed my friends and I missed going to work and feeling like I had a purpose. I missed earning an income and feeling independent. I no longer had reason to get dressed in the morning or take a shower. I wasn’t making money and I was so sick and in so much pain that I didn’t do anything but lay around.

Not A Life to Envy

The situation above wasn’t the first time I have been in this situation. I was diagnosed as a kid and I spent most of my childhood years in the hospital and missing school. In high school and college once I started working I had to miss both work and school. My life now definitely isn’t something to envy. I would give anything to be healthy and to be able to work. One of the reasons I started my website, Inflamed & Untamed was because I was out of work again due to a long hospitalization and I needed something to make me feel like I had value and purpose.

I know that when people say that they wish they could stay home too that they don’t really understand what they are saying. They usually have no clue what my life is like and probably think that I just get to stay home every day and live a carefree life with no responsibility. The truth is that I live every day in pain. My life is full of doctors appointments, hospitalizations, and procedures. I wake up and I play of game of “this or that” every.single.day.

If I do this (eat) I can’t do that (much of anything because I will be in pain). And so on…

Most days I have no idea what the day or date is. Everything runs together. I see my friends less and less and our relationships have changed. I look around and feel overwhelmed by the housework I need to do and all the things I keep putting off that are annoying others in my life. I am weighed down with the guilt I feel about not being what a woman/friend/girlfriend/etc. should be. And yes, I do know that those are mostly the unrealistic standards that I have placed on myself. I do wish that I could do more. Those are my truths.

I envy the people that get to go to work and school and they should not envy me.