A Year in the Hospital 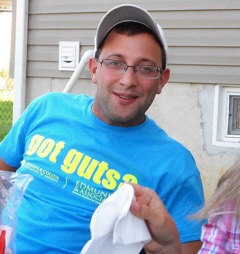 One of our incredible advocate writers here at InflammatoryBowelDisease.net went through some terribly rough years with his Crohn's disease, having spent over 365 straight days in the hospital. Paul is doing much better now, but that period of his life will never truly be forgotten. Some of you in the community have asked about Paul's experience, so we reached out to him to see if he'd be willing to be interviewed about his time in the hospital, and he agreed! Check out what he said:

1) What was the original reason you went to the hospital?

Originally I went to the hospital for a Ileoanal J-Pouch Surgery. We had exhausted all other options to steer away from surgery. This was a a two part surgery, that would remove my infected large intestine. My surgeon was to create a fake colon called a “J-Pouch” out of small intestine and rectum. During the surgery my surgeon would tie off bowel movement access to the new large intestine, and redirect it to my Ileostomy. An Ileostomy is a small hole on the side of my stomach that fecal matter would come out of. This was not permanent, as the second surgery (3 months later) would be to redirect my bowel movements to the new J-Pouch. My surgeon would also seal up the ostomy site.

2) How long did you expect to be there?

I was supposed to be there from December 17th 2007 until Christmas Day (December 25th 2007). I was to then return in three months for the 2nd surgery.

3) At what point did you realize you’d be there for a while? What was that like, emotionally, for you and your family?

I realized something was wrong when the amount of stool coming out of my stoma was way too much. I was supposed to be changing the bag a few times a day. Yes, my bowel had just woken up (as it literally shuts down during surgery), but even with the introduction of “liquids,” i was excreting way too much! The doctors tried everything to slow down my bowel. From liquid opium to large amounts of pain medications, nothing was working. Three weeks later, I was still in the hospital!

The doctors put me on TPN, to bypass my gut and feed me via IV. Since TPN has lot of sugar in its contents, the PICC line site is very vulnerable for infection. Of course my body being so immuno-compromised developed MRSA and staph. Things in mid January 2008 really started to go downhill. My surgeon tried to reverse the ostomy bag in 2008, but had to leave me wide open (you could literally see my intestines) for seven months as large fistulas formed. These fistulas spilled 3,000 ML of bile into containers and onto the floor each day.

My family became very frustrated. They started blaming the surgeon. He, who was one of the founding fathers of Colorectal surgery, understood where they were coming from. My parents at one point want to transfer to me to another hospital. They thought maybe a different doctor’s perspective would help. They felt helpless. They were not doctors. My mom stopped working for a very long time. Her boss had to understand. My father did his best to go to work to support my family. My parents would take shifts. Mom would come in the morning about 9 AM. She would stay with me until around 3:30-4:00 P.M. My father, who has his own business would go two work and come see me from about 5:00-8:00 P.M. This went on for many months.

4) What was the most challenging part of being in the hospital for a full year?

That is tough one. I would have to say there are two things that stood out. One challenging part of being in the hospital for over a full year was that my health declined so rapidly. I was so amazed how I went from 162 LBS to 81 LBS in about 5 months. Since I was bed ridden for so long, I lost all muscle mass. I could not stand up without my heart rate sky rocketing to 162 BPM. I couldn’t take more than five to six steps without getting winded. After being on life-support for three weeks, and not eating for seven months, I had to teach myself how to chew and swallow again. I was also very forgetful. When I was on life-support, they gave me very strong drugs to keep me asleep, and calm. When I came off the ventilator, I had no idea where I was, who people were, and why I was in the hospital. It was very hard having people explain to me the basics again and again.

The other challenging part was when people on my floor were discharged. On the days that I was healthy enough to sit in the hallway, I would watch people who came into the hospital after me leave to go home. You could see the smile on their face, the sense of relief that they were getting their life back on track...

Stay tuned for Part 2 of this incredible interview!