The Game of Crohn's

I was diagnosed with severe Crohn’s disease in May 2001 my senior year at LSU. I have endured 5 colon re-sections, 5 blood transfusions, an ileostomy surgery, a coloctomy surgery, and now have a permanent ostomy device. In addition to battling IBD, I suffer from anxiety, ADHD, and depression.

Making the most of my remission

After being prescribed to (and failing) every treatment on the market for Crohn's Disease, I achieved remission in 2015 when Entyvio was approved in the US. Two short months later, I began my advocacy journey. I have utilized this remission to my advantage to advocate with the Crohn's & Colitis Foundation - I travel yearly to DC to advocate against Step Therapy and other healthcare laws affecting not just Crohn's, but millions of patients nationwide. I also travel nationwide with Takeda Pharmaceuticals, sharing my journey and results with Entyvio, film videos for patient and marketing usage, serve as a mentor on calls with patients and healthcare experts on behalf of EntyvioConnect.

Prior to finding the courage to advocate, I suffered from depression and was in a dark place because of "what happened to me". I've learned to turn this around and I know God intended for me to take this path so that I can advocate, inspire, and educate other patients. Being a single mother to 2 wonderful girls, I want to lead by example and inspire them as well. We don't need to alter our goals because of our disabilities - we may just have to take different paths than others to achieve them! There is pain that uses you and then there is pain that you use. And I intend on using my past pain and experiences to hopefully prevent others from reaching that dark place I was in for so long. 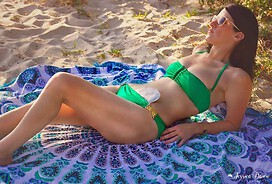 Recently Diagnosed with Crohn's at 20

When It's Time to Get a Second Opinion