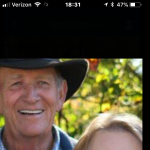 While serving on the flight deck of the USSEnterprise CVA(N) 65 in the gulf of Tonkin in 1966 and ‘67, I would have periods of serious pain in the stomach area. I wasn’t one to go to the Dr. for anything that you could not see (a broken arm, leg, etc.) so I just tutted it out.

At first they would last no more than a week every two or three months. I learned right away when it started not to eat everything would hurt.

Fast forward to 1968, I served my time and was home from the Navy. I was still having these stomach problems but now more frequent and more severe. I got married in Dec. ‘68. I weighed in at 200lbs, my wife 98lbs. Feb ‘70 pregnant with our 1st daughter Judy weighed 125 and I weighed 130. Local Dr. diagnosed a psychosomatic problem, she said I thought that had an issue with my stomach strong enough that caused me to really feel pain and swelling there.

After 5 different hospitals and many upper and lower GI’s In the winter of 1976, after a week long severe flare blockage occurs. I had finally imagined a real illness. Transported to ER where sent for x-rays. 1 hour later when I got back to room, an older Dr. came in and told me about Crohn’s, first time that I ever heard that word. It took 10 days of IV feeding to build me up enough to withstand the surgery.

That was the first of three surgeries, the last was Oct. 1996 after more flares I started Remicade (infleximab). 2003 no more flares but a lot of all the associated inconveniences that go with the life of a Crohn’s patient. Of all the things I could have imagined I really wish it had not been Crohn’s.