Bile is a fluid that helps you to digest fat.1 The liver produces bile, which is stored in the gallbladder. Bile is made up of water, bile salts, cholesterol, and a pigment called bilirubin, among other things. The gallbladder releases bile into the beginning of the small intestine (duodenum; Figure). The bile salts break big fat drops into smaller droplets. Smaller droplets are easier to for your body break down and absorb. Nearly all of the bile salts are reabsorbed at the end of the small intestine (ileum). They are reused to make more bile.1 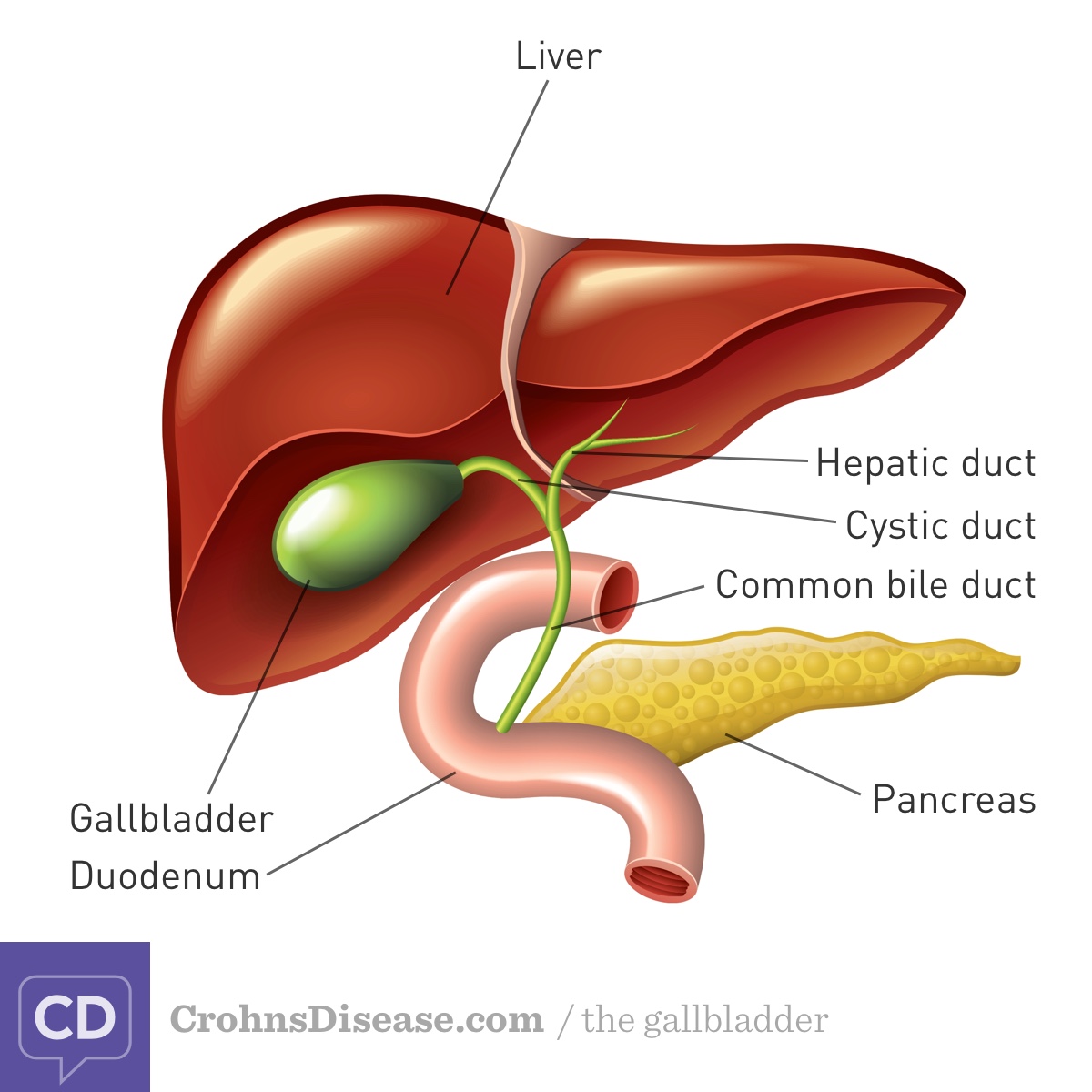 Why is inflammatory bowel disease linked with gallstones?

There are several reasons that people with Crohn’s disease are at risk for gallstones:

What are symptoms of gallstones?

Many times, gallstones do not cause any symptoms.3 Symptomatic gallstones may cause steady, moderate-to-severe pain in the upper right part of the abdomen.

What are other risk factors for gallstones?

Besides inflammatory bowel disease disease, other risk factors for gallstones include:2

How are gallstones evaluated?

If you have symptoms of gallstones, your health care provider will probably need to do an imaging test.3 There are several different ways of looking at your gallbladder. Ultrasound is usually used first because it is inexpensive and effective. A second option is a computed tomography (CT) scan. Your provider will get a better look at the gallbladder and ducts with a CT scan, but this test is more expensive and involves radiation. Magnetic resonance imaging (MRI) may be used as an alternative to a CT scan. Instead of x-rays, an MRI uses magnets and radio waves to take pictures of certain areas of your body.

Other tests that may be used to evaluate gallstones include:

How are gallstones disease treated?

If the gallstones are not causing symptoms, you may not need treatment.3 Your health care provider may just want to follow-up with you periodically.

When treatment is necessary, the usual treatment is surgery to remove the gallbladder.2 This procedure is called cholecystectomy. Your gallbladder is not an essential organ, so you can live normally without it. The surgery can be done as a minimally invasive (laparoscopic) procedure or an open procedure. Both procedures have the same complication rates. You may be able to go home sooner and recover more quickly after the minimally invasive approach.3

If you cannot have surgery, other treatments include:2,3

What are complications of gallstones?

The complications of gallstones depend on what they are blocking.2 The gallstones can block the cystic duct or common bile duct, which lead away from the gallbladder. This can increase pressure and inflammation of the gallbladder. A gallstone could also block the shared outlet for bile and pancreatic juices. When this happens, the pancreas may become inflamed. Untreated blockages can be fatal.