The Crohn’s Disease in America 2016 online survey was conducted to gather insights from over 2,000 individuals currently diagnosed with Crohn’s Disease. The primary goal of this research was to better understand the symptoms, treatment, and life impact experienced by those individuals. A survey specific to those with ulcerative colitis was also conducted and will be presented at a later date. 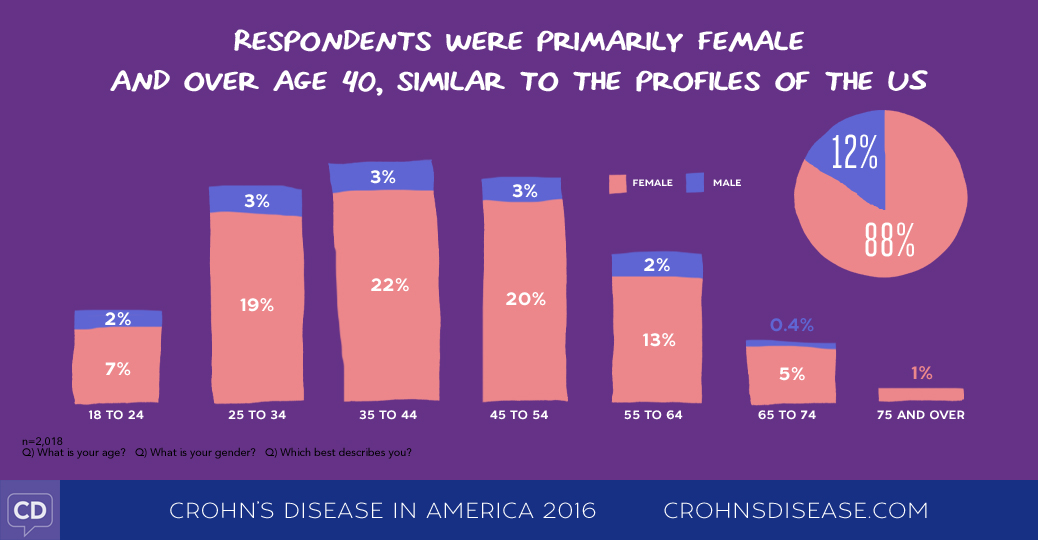 99.8% of respondents currently lived in the US, spanning across the various regions of the country 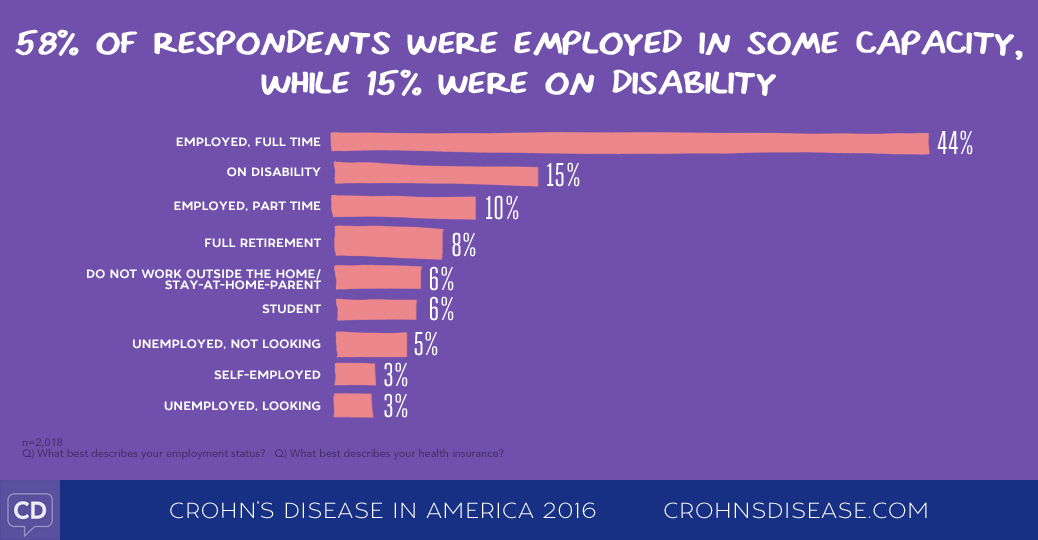 96% of respondents had health insurance or Medicare/ Medicaid, with group coverage being most common 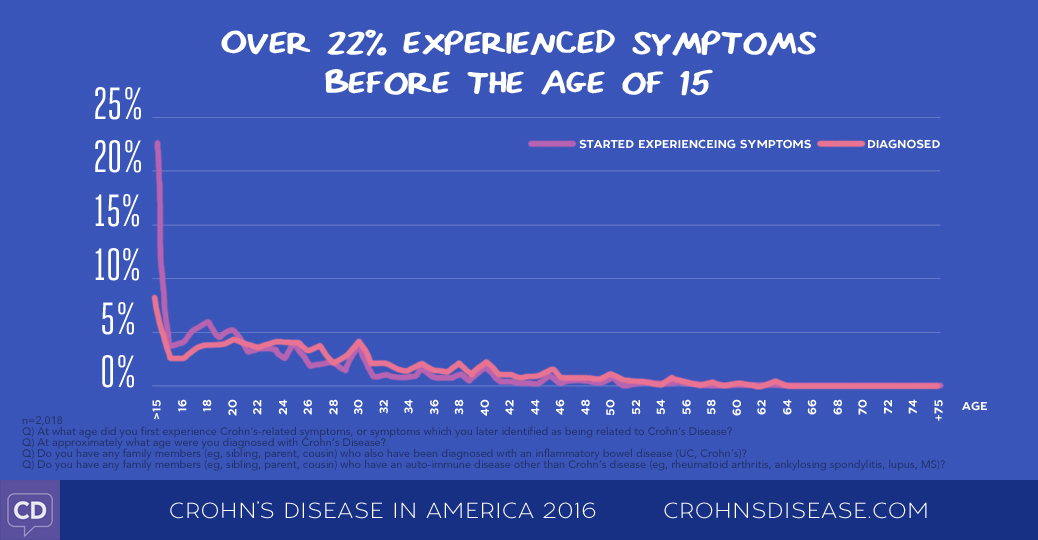 Respondents experienced an average of 5 symptoms before receiving a diagnosis 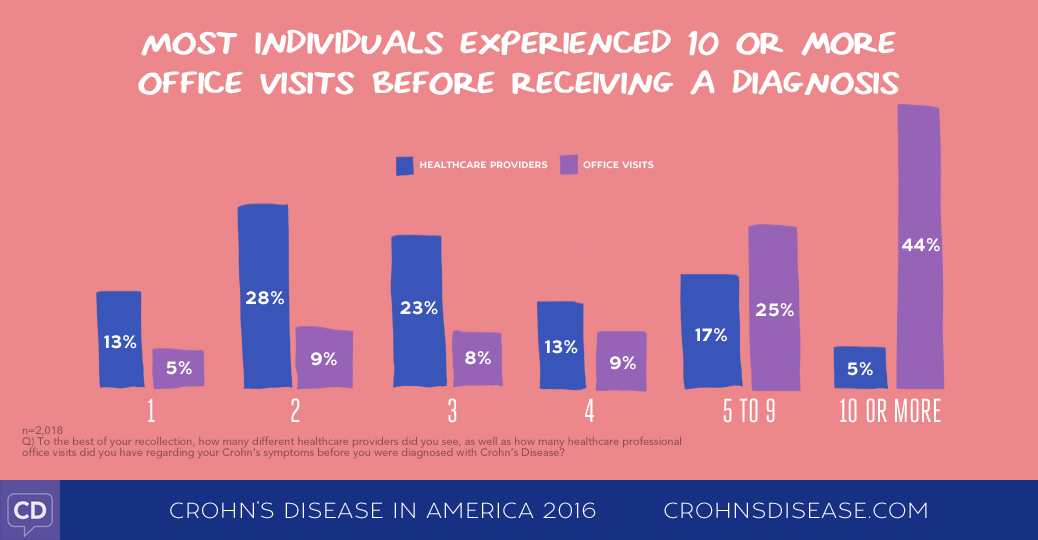 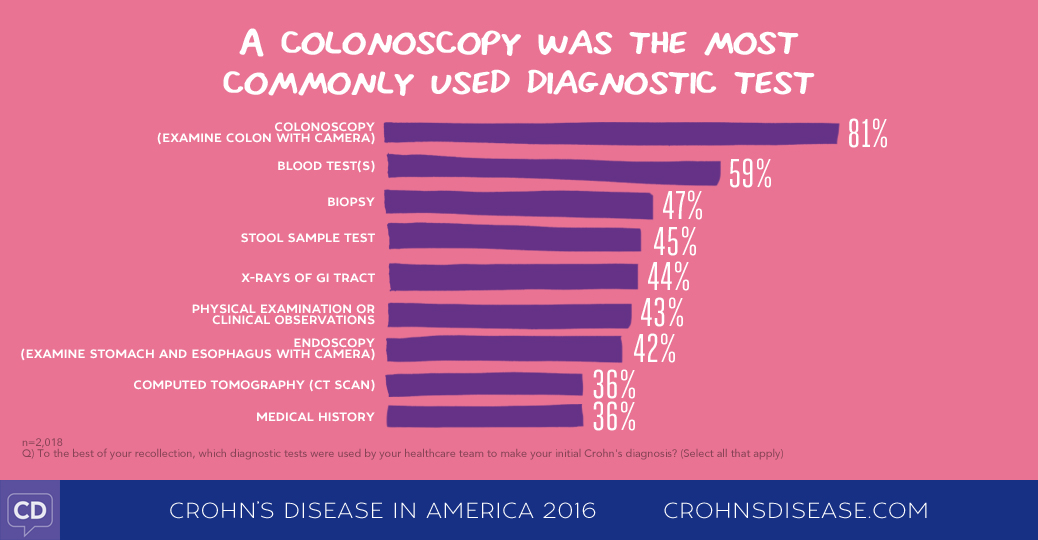 However, respondents endured an average of 5 different diagnostic tests before receiving a diagnosis 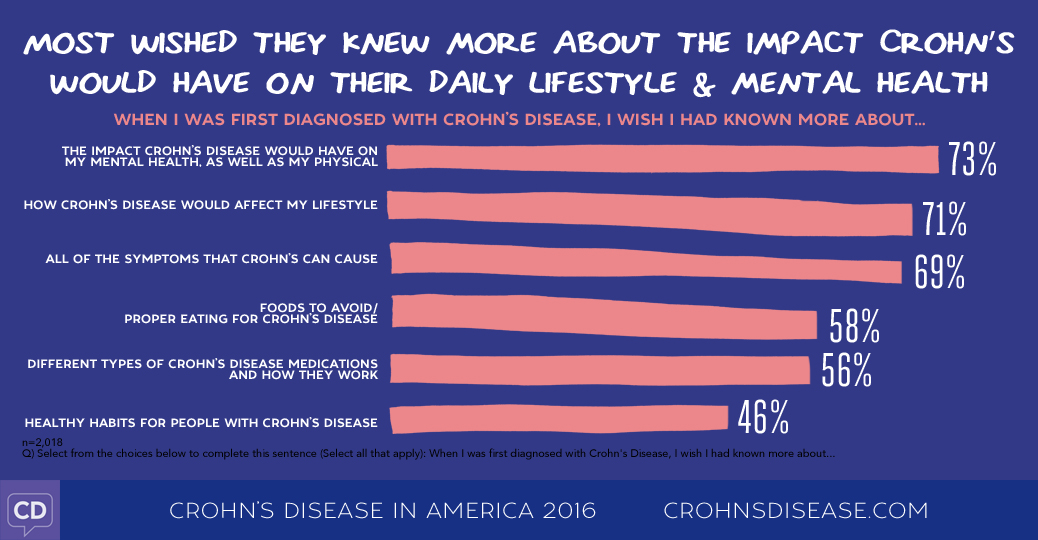 The number and variety of potential symptoms was another desired topic. Only 2% of respondents felt they knew everything at the time of their diagnosis

At the time of the survey, respondents were experiencing an average of 7 symptoms. Bloating and abdominal cramps/pain were the two most common. 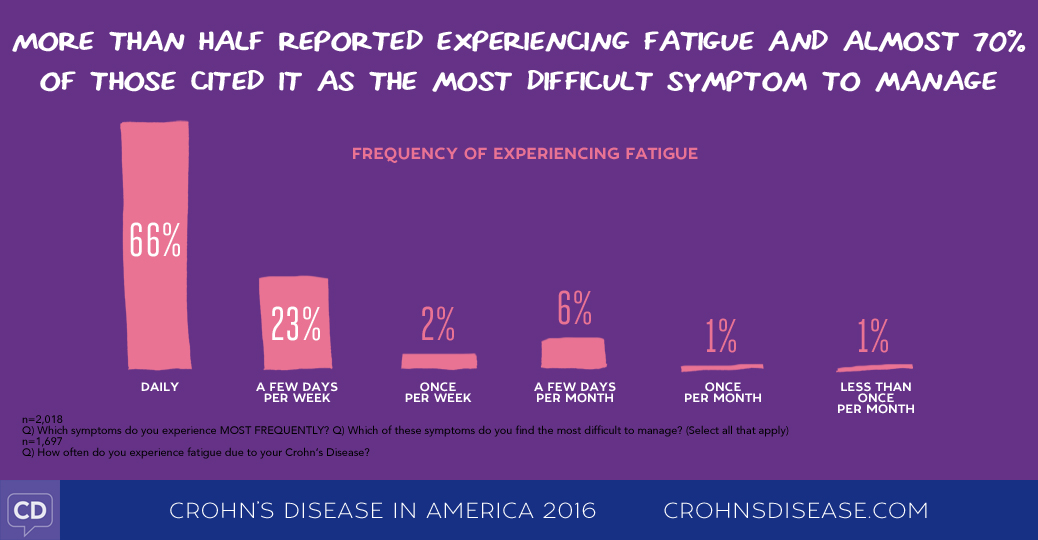 For those who experience fatigue, over 65% said they fight it daily 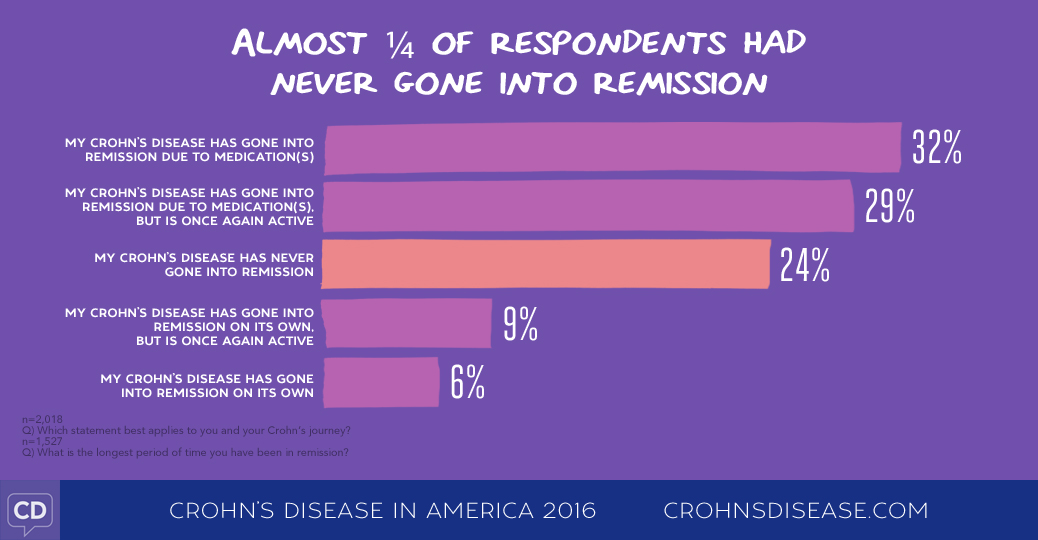 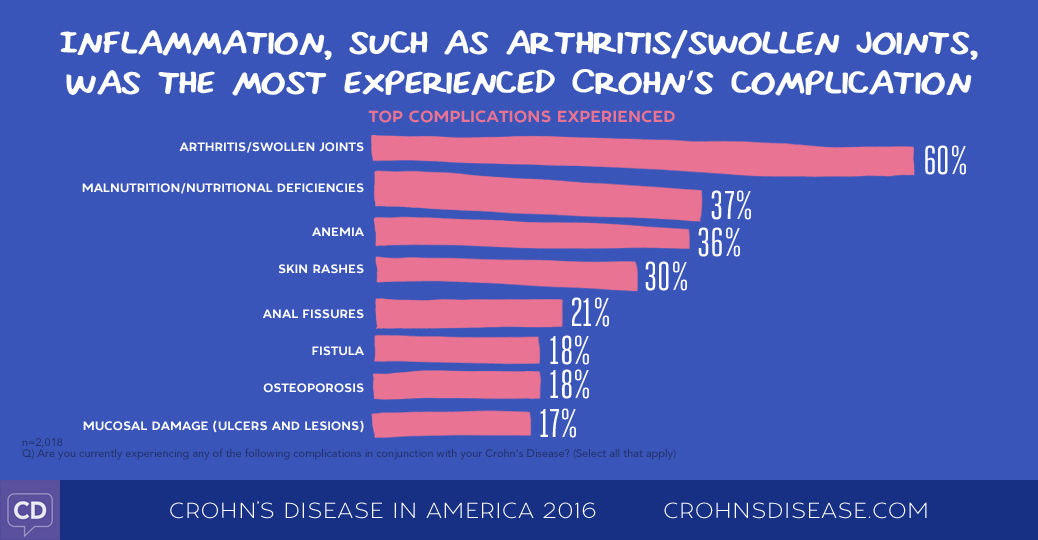 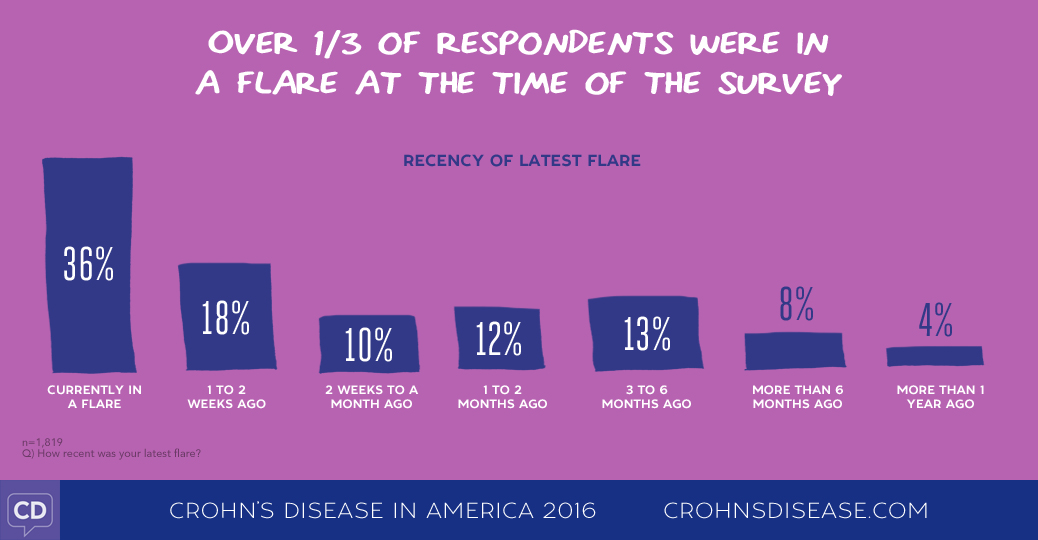 75% experience at least 4 flares a year, often even more 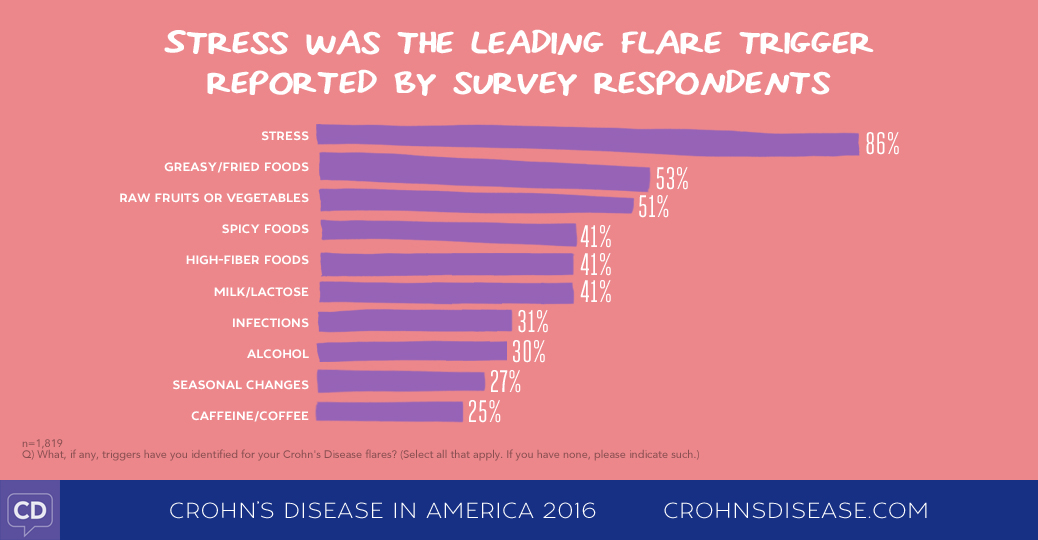 Half the respondents cited greasy/fried foods as a trigger and another half reported raw fruits and vegetables as a trigger. This further emphasizes how difficult it is to identify a universal “Crohn’s diet” 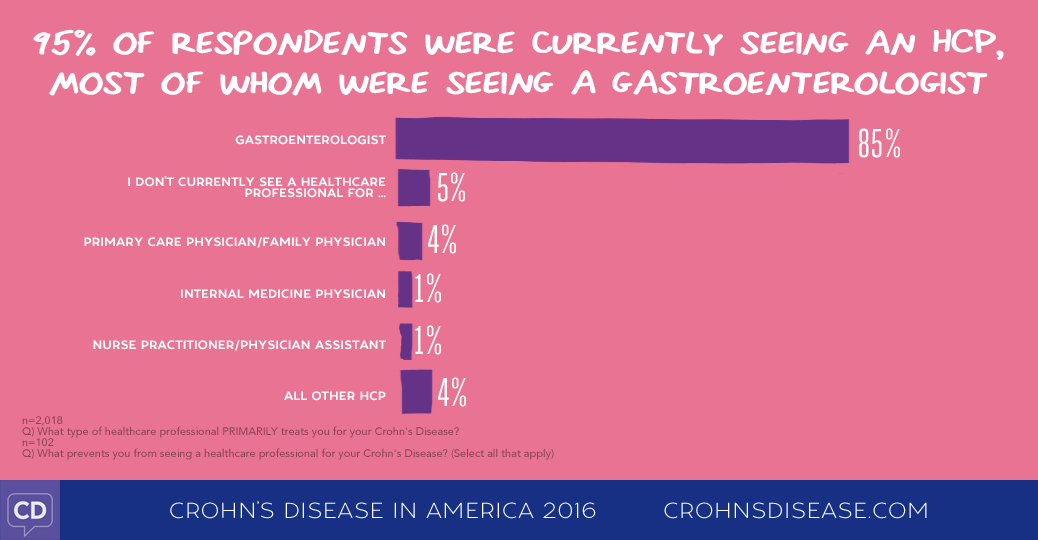 For the 5% not seeing an HCP, the primary barrier was a lack of financial resources and/or insurance 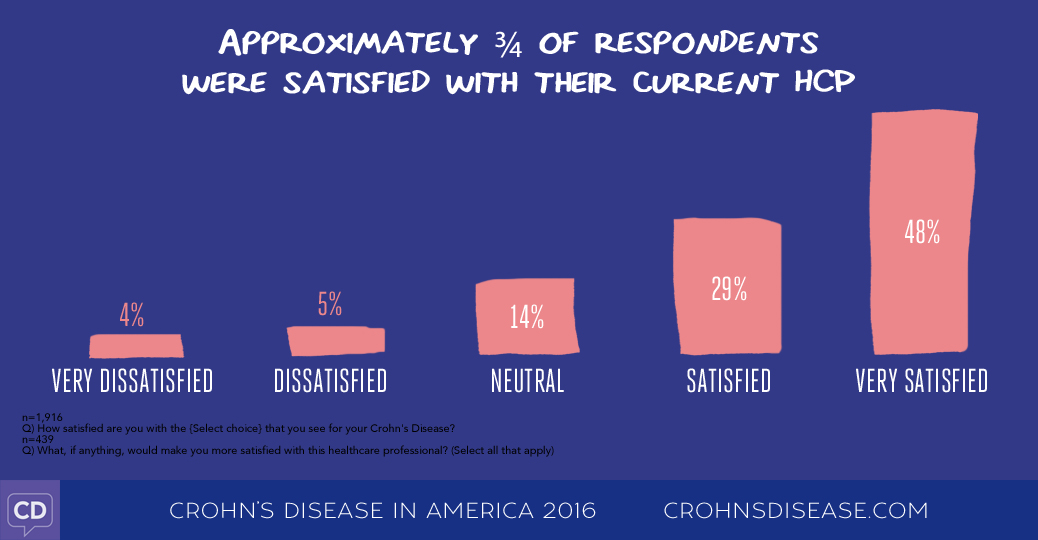 Doctors’ lack of empathy, understanding and communication were the primary reported reasons for dissatisfaction 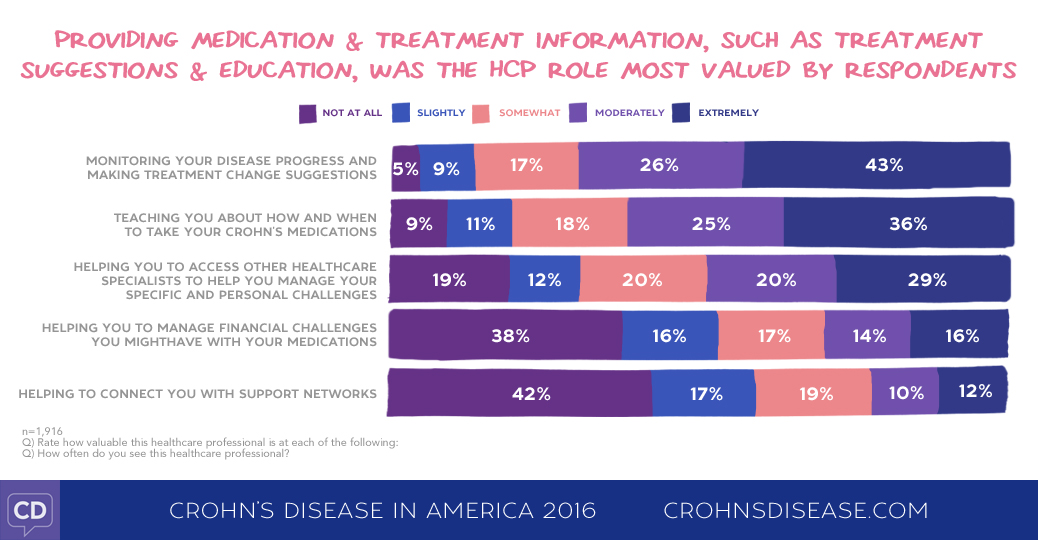 Most respondents saw their HCP every 3-4 months to discuss their Crohn’s. 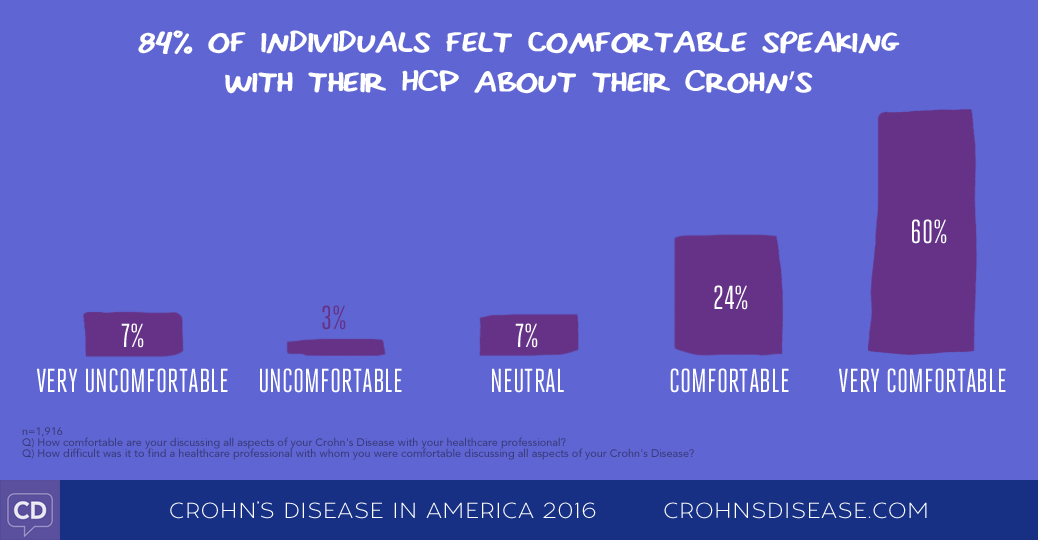 Additionally, most had little difficulty finding an HCP with whom they felt comfortable 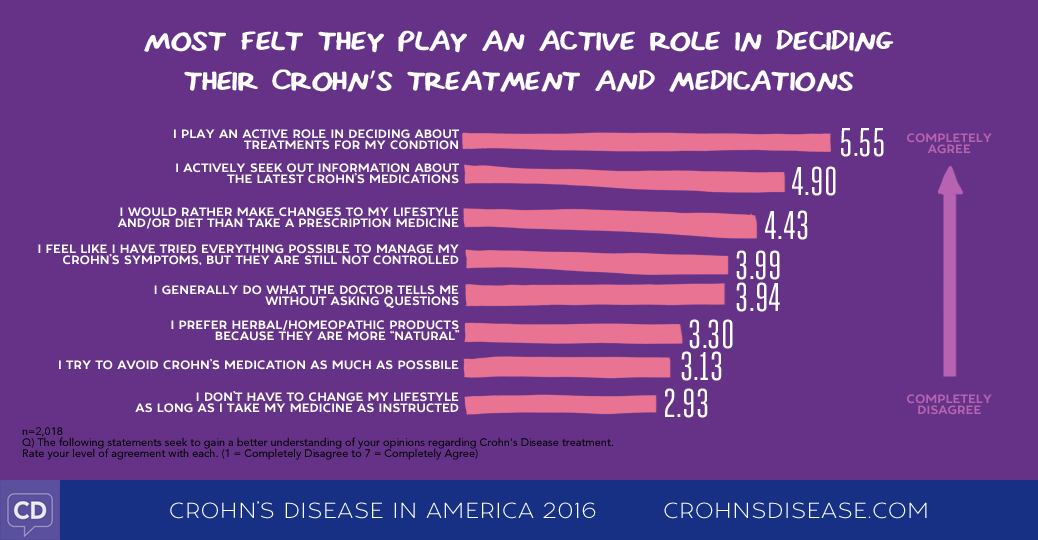 Not only do individuals feel they play a role in their treatment, most reported that they actively seek information about the latest Crohn’s medication developments 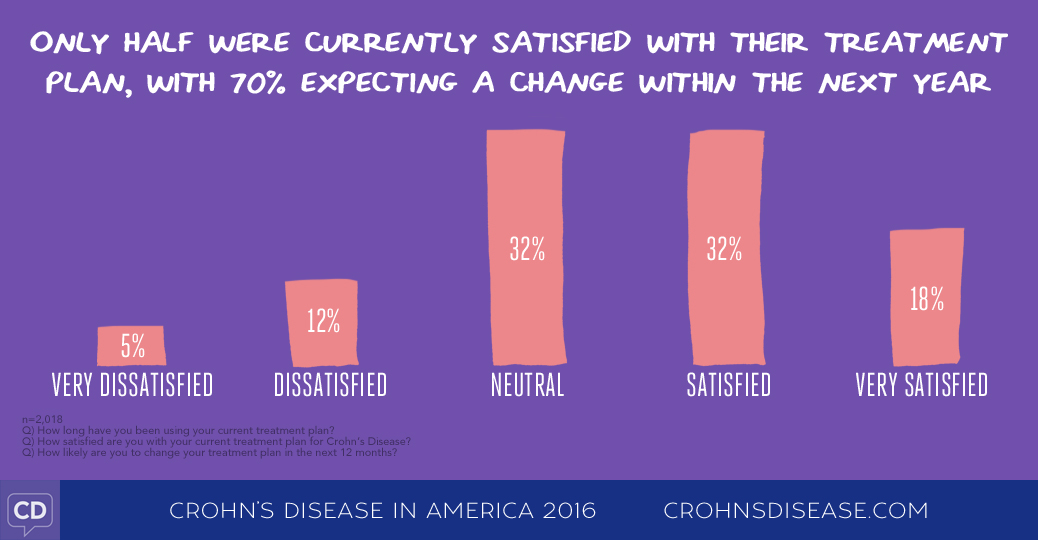 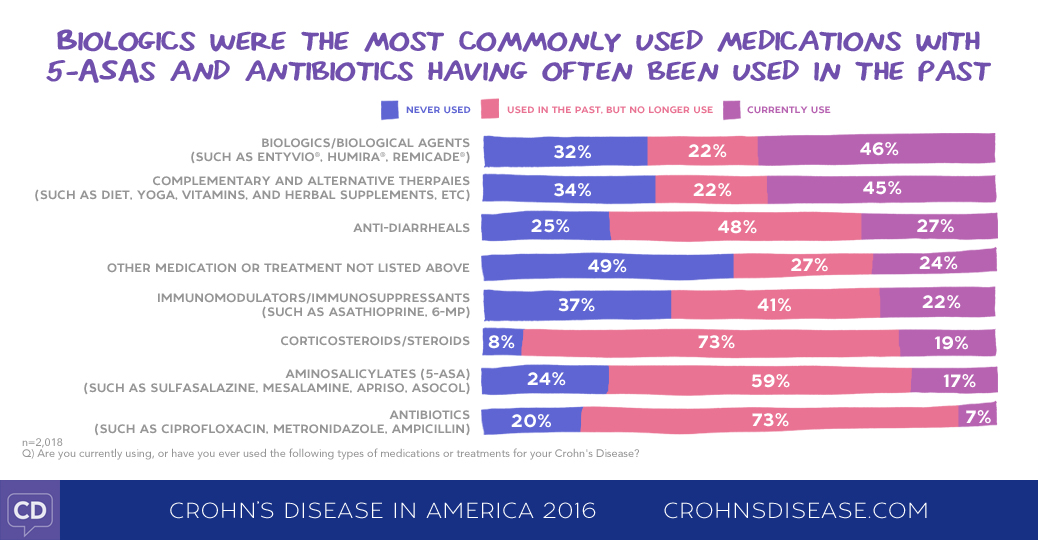 The potential side effects were a primary barrier for those not using biologics, but of those who had used them, 60% had been prescribed more than one 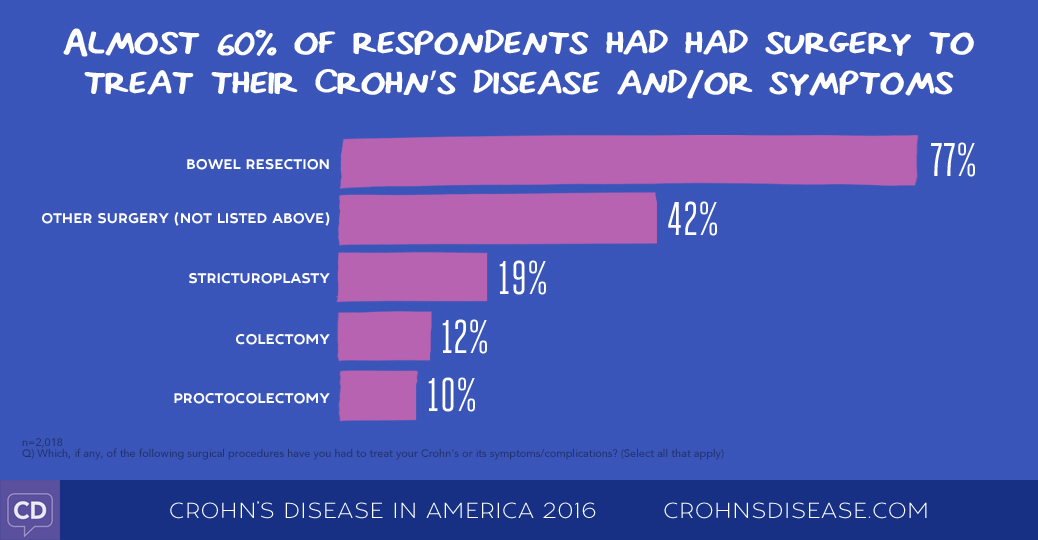 Bowel resection was the most common surgery endured by individuals 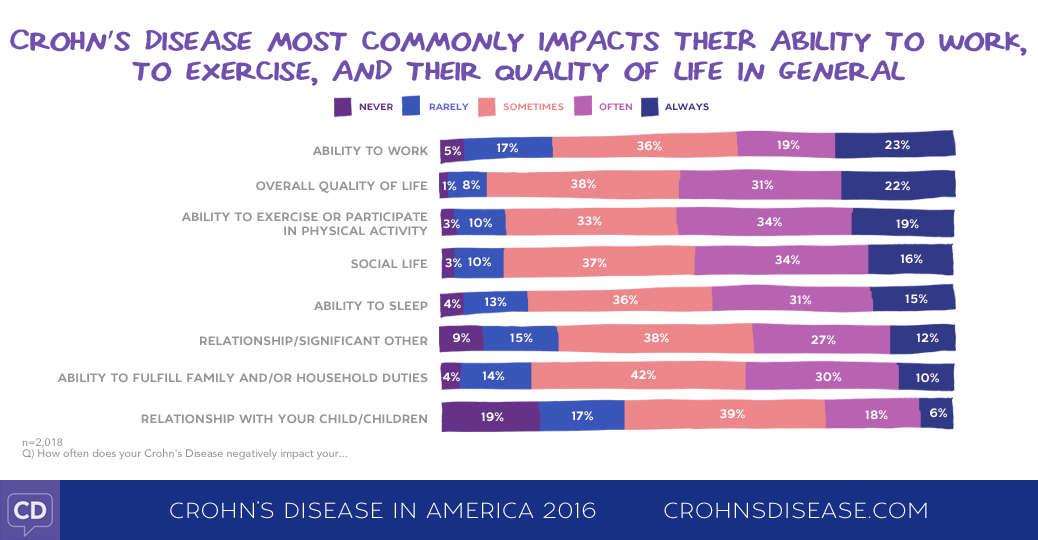 Respondents felt that their relationships with partners, children and family were affected by Crohn’s to a lesser degree 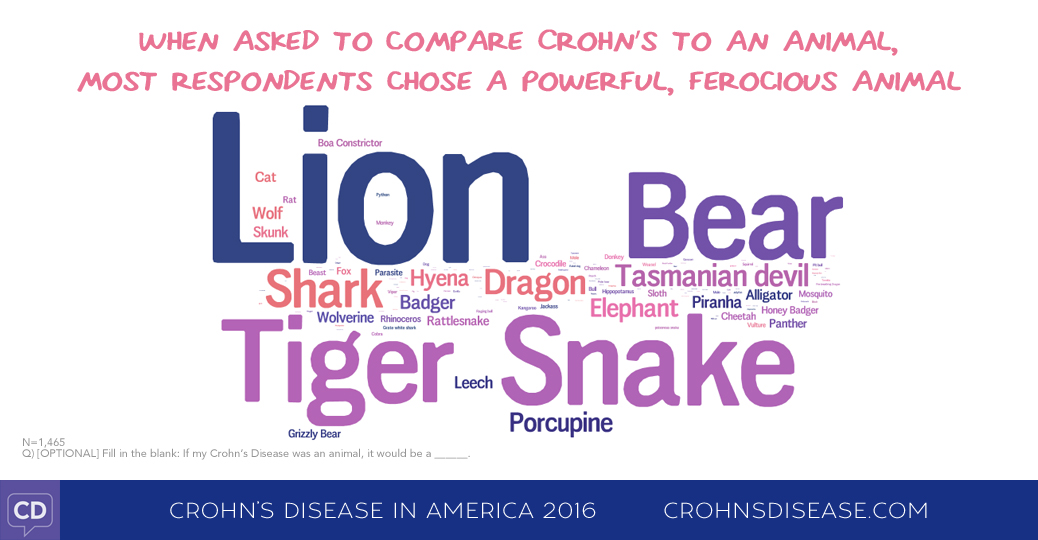 Once again, on average, individuals felt that Crohn’s had a minimal impact on their ability to maintain relationships. This especially speaks to the strength of those diagnosed with this disease

5th Annual IBD In America: What Is That?

Have you completed the IBD in America survey? Answer poll for survey link.