This is part of a series about how ulcerative colitis impacted different parts of my life. This is not my usual type of post. There are no tips, learnings, or useful bits of IBD information. This post focuses on my romantic relationships.

These are simply the raw and honest thoughts that I have when I’m feeling a bit annoyed with my life. Times when the fatigue gets to be too much, I’m stuck indoors, or I’m laid awake at night. I’m sharing this with you simply because I want you to know that you are not alone.

I can’t help but wonder what my life might have been like if I didn’t have ulcerative colitis. I think about all of the things that would have been different, and then I wonder how much different, or better, my life would be now.

The impact of diagnosis on my romantic relationship

When I was diagnosed, I was with someone who I‘d only been with for about 3 months. I was only 19 years old, so I was still very much in the process of learning what a good relationship was, and how one should be treated.

I actually pushed him to leave, because a diagnosis of an incurable disease and then surgery to remove my colon shortly after was a lot for me to be dealing with. It didn’t seem fair to put it on somebody else. He chose to stay.

There had been a few complications after the surgery. I’d had sepsis which required another surgery to open me back up and clean everything out. I’d also had C-diff and post-op ileus, which basically means that my bowel had taken a little nap, and wasn’t pushing anything through as it should have.

I left the hospital after 6 weeks, barely able to walk because I’d lost all of my muscle. I looked like a skeleton with skin hanging off of it. The recovery was so hard, mentally and physically, but eventually, I got there.

The whirlwind with my health had made me look at my life, and I wanted to make changes. I moved out of the house I grew up in and began a new life with my partner. We’d been through so much, so the fact we’d not even been together for a year didn’t seem to matter.

Physically, UC was so hard on my body

I was struggling with my confidence. I had thrown away all of my clothes and bought baggy items, many of which were boys' T-shirts and joggers. Looking back, that probably didn’t help. I also refused to take my T-shirt off during physical intimacy.

I didn’t want to go to the pub like I used to. I had nothing to wear, and my bags often leaked. I wasn’t the only one with issues. My boyfriend still wanted to go to the pub... A fact that I ignored because my surgeon had told me that a reversal meant having a J-pouch, and that meant decreased fertility. So, we were trying for a baby, before it was too late.

I became pregnant, and then had a miscarriage. He hadn’t been supportive through it. I had spent the night before my hospital visit in a separate bed, and I’d gone to the appointment alone. I didn’t think I had the strength to go through that again, so I needed to really think about it.

Too much strain on our relationship

I didn’t want to accept that my future might not have a child in it, but our relationship was filled with arguments, I finally realised that a child couldn’t be born into that, and so I went ahead with the J-pouch surgery. I blamed him for it, which caused a lot of resentment.

He wasn’t very supportive during my recovery for the J-pouch creation, or the connection of it either. It seemed like he was starting arguments, just so he could storm out and go to the pub. So, I was often home alone, unable to get myself downstairs to do anything, like find food and eat it!

He had an alcohol dependency, and I tried my best to support him to come out of the other side. He often reminded me that it was an illness and that he had stuck by me through mine, so I owed him. I stayed with him a lot longer than I should have. Constantly feeling let down, and angry about the lies he told.

Accepting my UC and myself (on my own)

I think I stuck around for so long because of how I felt about myself. He also often told me that no one else would ever want me. I was broken and scarred, which made me unattractive. I believed it to be true, too, and so I did nothing. I didn’t think I deserved any better than what I’d got.

When I walked away, I felt nothing but relief. I could finally breathe again. My friends even commented on how much happier I was.

Dating didn’t really go well for me. The more I went on, the more I felt like being on my own was what I wanted. I was constantly learning about myself. What I liked and didn’t, what I would and wouldn’t accept from others, and what the deal-breakers were.

I was always upfront about my ulcerative colitis, my scars, and the fact I might need a stoma again in the future. I often scheduled in rest, and I liked to do that alone.

People I was dating could never understand that doing nothing was THE something I was doing. That annoyed me. I felt like I was being pressured into seeing them, which usually led to never seeing them again. It definitely wasn’t a waste of my time, but it was exhausting, and so I stopped doing it.

I felt like I’d fully settled into life, and got what I needed to out of my system, right before I became unwell again. So, I began just working and resting. I had become my main priority.

My health is part of my relationship

My health was something I was putting a lot of thought into, and I was remembering all of the things that my journey had taught me along the way. That’s when my IBD awareness activity began.

It was actually during my flare and cycling through treatments that I became interested in someone. The saying does go that the right person comes along when you’re not looking!

It was only because I was happy on my own that I knew I really liked him. I was happy to make time for him, whereas with other people, it felt like a chore. I had known him in school, and he came to my house to fix my TV aerial. The rest is history...

Many of the choices I made didn’t even feel like choices. At the time, it didn’t seem like I had options, it just felt like I HAD to do things the way I did. Now, it makes no sense, and that makes me sad. 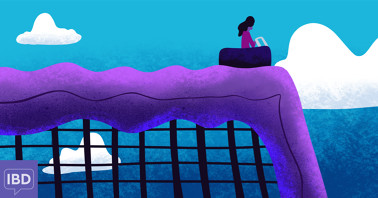