Is it possible for Crohn’s to not show up on a colonoscopy?

Hello! I am going through some health issues that started In January and we still don’t have answers. I’ve had 2 egd, pill oscopy, 2 colonoscopies. Up till my second colonoscopy I’ve had no symptoms. Until 4/14/19. Started having symptoms at 4/17/19 blood in stool large amount in and surrounding. Since then barely blood but it is on and off. Had second colonoscopy after I called doctor saying about my episode. Then scheduled a colonoscopy and found nothing but a hemorrhoid I think, but now horrible smell of first clumpy and ribbon strip like stool that appeared soft. That continued, then I noticed white cloudy fuzzy around my stool. While during this having strong episodes of abdominal pain. I get up I’m dizzy majority of time, tired lack of energy and joint pain as well. They did however find a tiny bit of inflammation in my esophagus but said due to excessive acid production but never proscribed me anything. Can Crohn’s or any colon related conditions not show up on scope or camera test in beginning stages? Thank you so much In Advance

Have a question? Ask it here! 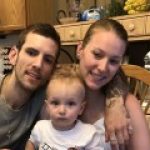